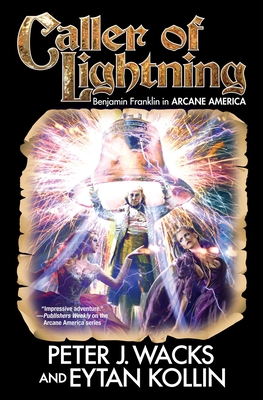 When Halley’s Comet blazed across the sky in 1759, onlookers saw a sight far more spectacular—and disastrous—than they ever could have imagined. Destroyed in a magical battle, the comet is rent in two and appears to strike Earth. The event is known as The Sundering, the moment in which the Old World is separated from the New, perhaps permanently isolating the Americas. What’s more, The Sundering has brought magic into the world—creatures from folklore and fairy tales come to life, along with wizardry and magework unlike anything seen outside of legend. The New World is now far stranger than before, and the Europeans, Africans, and Indigenous peoples on the American continent must forge new bonds if they are to survive.

So, when magic returns to the world of the 1700s, who does the world turn to for help? None other than the father of electricity himself: Benjamin Franklin! But Franklin is in for a shock if he thinks his knowledge of science will prepare him for the world of magic. The master once more becomes the apprentice. But Franklin must learn his spells fast, for he is far from the only one studying magic.

"Peter Wacks is a talented writer coming at you from all different genres. Watch out, readers!"—Kevin J. Anderson

Praise for the work of Etyan Kollin:

"Turns what could have been a one-note trilogy into something more interesting that encompasses a wide range of ideas."—The Denver Post

"The Kollins' masterful command of multiple plot threads, characters, and the motifs of grand-scale space opera make for a breathtaking sequel."—Booklist

"Rich with multiple plot thread skillfully handled by the authors. . . . Well-conceived characters, along with intense battle-oriented space content, will keep even new readers glued to the page."—RT Book Reviews

Eytan Kollin is the author (with Dani Kollin) of the successful and award-winning Unincorporated series. The first book in the series, The Unincorporated Man, won the Prometheus Award, and two of the three other books in the series were nominated for the same. Eytan has also published a book of short stories called Grim Tales of the Brothers Kollin.

Peter J. Wacks is a cross-genre writer who has worked in various capacities across the creative fields in gaming, television, film, and comics, and most recently, when not busy editing, he spends his time writing novels. He has been a panelist, guest speaker, and guest of honor at a combined total of more than 250 conventions, trade shows, organizations, and colleges—including GAMA, Mensa Colorado, and UCLA. When he isn't working on the next book, he can be found practicing martial arts, playing chess, drinking Scotch or IPA, or fighting with swords.
Loading...
or
Not Currently Available for Direct Purchase