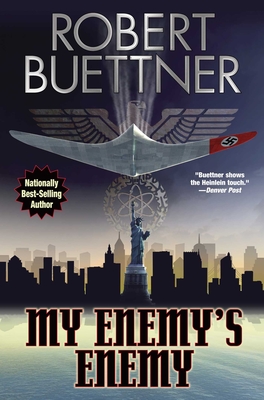 STOP THE NAZI A-BOMB. The past and the present collide when an international terrorist seeks to unlock the long-buried secret of the Third Reich's ultimate weapon in this technothriller from Robert Buettner.

In September 1939, Nazi Holocaust mastermind Heinrich Himmler conscripts brilliant physicist Peter Winter to devise a secret weapon of supreme power and to create a revolutionary aircraft to deliver it. Peter and his Jewish wife, Rachel, know they may only be able to slow Himmler down, and not stop him from developing the ultimate weapon.

Praise for My Enemy's Enemy:
"Finely researched and gripping, as well as incredibly well-written . . . My Enemy's Enemy is an impressive and highly recommended novel."—Brendan DuBois, best-selling mystery author

Praise for The Golden Gate:
"Futuristic and imaginative, The Golden Gate, by Robert Buettner, sweeps across continents and centuries in a thrilling chase for the truth about longevity.  The science is fascinating, and the suspense never lets up.  Readers will revel in this terrific roller-coaster ride."—Gayle Lynds, New York Times best-selling author of The Assassins

About Robert Buettner's Balance Point:
"Buettner . . . conducts his thriller action with suspense and plausibility. All the separate threads balance neatly, as if in homage to the book's themes of balance between antagonistic polities . . . and [Balance Point] carries forward nobly the kind of core SF tale pioneered by writers such as Anderson, Gordon Dickson, Christopher Anvil, James Schmitz, and C.J. Cherryh, offering entertainment aplenty with thoughtful meditations on how humanity can get along with itself or not!"—Locus

About Robert Buettner and the Orphan's Legacy series:
“Buettner goes well beyond . . . military science fiction . . . he understands . . . living as a soldier—the boredom punctuated by terror, the constant anxiety and self-doubt, the random chaos that battle always is, and the emotional glue that holds together people who may have nothing in common except absolute responsibility for one another's lives.” —Joe Haldeman, Hugo and Nebula Award-winning author

Robert Buettner has been general counsel of a unit of one of the United States’ largest private multinational companies, served as a U.S. Army intelligence officer, prospected for minerals in Alaska and the Sonoran Desert, and was a National Science Foundation Fellow in paleontology. Buettner was Quill Award nominee for Best New Writer of 2005, and his best-selling debut novel, Orphanage, was a Quill nominee for Best SF/Fantasy/Horror novel of 2004 and has been called a classic of modern military science fiction. He lives in Georgia with his family and more bicycles than a grown-up needs.
Loading...
or
Not Currently Available for Direct Purchase