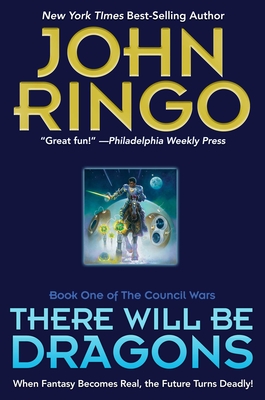 There Will Be Dragons ( Council Wars #1) (Paperback)

In the future there is no want, no war, no disease nor ill-timed death. The world is a paradise—and then, in a moment, it ends. The council that controls the Net falls out and goes to war. Everywhere, people who have never known a moment of want or pain are left wondering how to survive.

But scattered across the face of the Earth are communities that have returned to the natural life of soil and small farm. In the village of Raven's Mill, Edmund Talbot, master smith and unassuming historian, finds that all the problems of the world are falling in his lap. Refugees are flooding in, bandits are roaming the woods, and his former lover and his only daughter struggle through the fallen landscape. Enemies, new and old, gather like jackals around a wounded lion.

But what the jackals do not know is that while old he may be, this lion is far from death. And hidden in the past is a mystery that has waited until this time to be revealed. You cross Edmund Talbot at your peril, for a smith is not all he once was. . . .

John Ringo brings fighting to life. He is the creator of the Posleen Wars series, which has become a New York Times best-selling series with over one million copies in print. The series contains A Hymn Before Battle, Gust Front, When the Devil Dances, Hell’s Faire, and Eye of the Storm. In addition, Ringo has penned the Council War series. Adding another dimension to his skills, Ringo created nationally best-selling techno-thriller novels about Mike Harmon (Ghost, Kildar, Choosers of the Slain, Unto the Breach, A Deeper Blue, and, with Ryan Sear, Tiger by the Tail). His techno-thriller The Last Centurion was also a national bestseller. A more playful twist on the future is found in novels of the Looking Glass series: Into the Looking Glass, Vorpal Blade, Manxome Foe, and Claws That Catch, the last three in collaboration with Travis S. Taylor. His audience was further enhanced with four collaborations with fellow New York Times best-selling author David Weber: March Upcountry, March to the Sea, March to the Stars, and We Few. There are an additional seven collaborations from the Posleen series: The Hero, written with Michael Z. Williamson, Watch on the Rhine, Yellow Eyes and The Tuloriad, all written with Tom Kratman, and the New York Times bestseller Cally’s War and its sequels Sister Time and Honor of the Clan, all written with Julie Cochrane. His science-based zombie apocalypse Black Tide Rising series includes Under a Graveyard Sky, To Sail a Darkling Sea, Islands of Rage and Hope, and Strands of Sorrow. His latest novel is Gunpowder and Embers, written with Kacey Ezell and Christopher L. Smith. A veteran of the 82nd Airborne, Ringo brings firsthand knowledge of military operations to his fiction.
or support indie stores by buying on
Copyright © 2020 American Booksellers Association