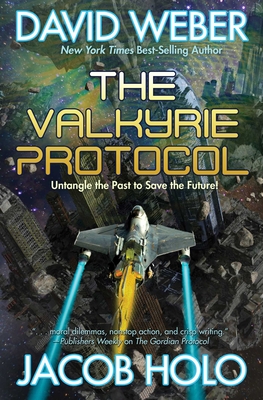 UNTANGLE THE PAST TO SAVE THE FUTURE. A NEW NOVEL IN THE WORLD OF THE BEST-SELLING THE GORDIAN PROTOCOL

TIME IS RUNNING OUT

Agent Raibert Kaminski and the crew of the Transtemporal Vehicle Kleio have stumbled across a temporal implosion that has claimed two whole universes, and neither Raibert nor his crew can ­ figure out what caused this calamity, or how to stop its spread. Meanwhile, old colleagues of Raibert’s from the Antiquities Rescue Trust, together with a version of Samuel Pepys transplanted from the 17th century into the 30th, have proposed an expedition into the past. The goal? To branch the timeline by preventing the Plague of Justinian, one of the worst pandemics in human history. And on a multidimensional level, governmental entity SysGov’s multiverse neighbor, the xenophobic Admin, is stirring. While their ambassadors put on a friendly show, the Admin is amassing a fleet of advanced, heavily armed time machines—with SysGov firmly in the crosshairs.

In the midst of the temporal turmoil, time is running out for Raibert and his team to save the rest of the known universes from ceasing to exist. Navigating the paradoxes of time can be a killer task—especially when dogged by those who seek your destruction at every turn. But this isn’t the ­ first Time Rodeo for the crew of the Kleio, and they won’t go down without a ­ fight—no matter where—or when—the threat to the multiverse arises!

About prequel The Gordian Protocol:

With more than eight million copies of his books in print and thirty-three titles on the New York Times bestseller list, David Weber is a science fiction powerhouse. In the vastly popular Honor Harrington series, the spirit of C.S. Forester’s Horatio Hornblower and Patrick O’Brian’s Master and Commander lives on—into the galactic future. Weber’s novels have appeared on more than thirty bestseller lists, including The Wall Street Journal, The New York Times, and USA Today. Weber is also the creator of the Oath of Swords fantasy series and the Dahak saga. He has engaged in a steady stream of best-selling collaborations, including the Starfire series with Steve White; the Empire of Man series with John Ringo; the Multiverse series with Linda Evans and Joelle Presby; the Ring of Fire series with Eric Flint; and now the Gordian Division series with Jacob Holo. David Weber makes his home in South Carolina.

Jacob Holo graduated from Youngstown State University with a degree in Electrical and Controls Engineering. He is the author of eight books, including two Gordian Division novels written with David Weber. Between novels, Jacob enjoys gaming of all sorts, whether video gaming, card gaming, miniature wargaming, or watching speed runs on YouTube. He is a former-Ohioan, former-Michigander who now lives in South Carolina with his wife/boss, H.P., and his cat/boss, Nova.

Jacob Holo is a former-Ohioan, former-Michigander living in sunny South Carolina. He describes himself as a writer, gamer, hobbyist, and engineer who started writing after his parents bought him an IBM 286 desktop back in the ’80s. He’s been writing ever since.
Loading...
or support indie stores by buying on