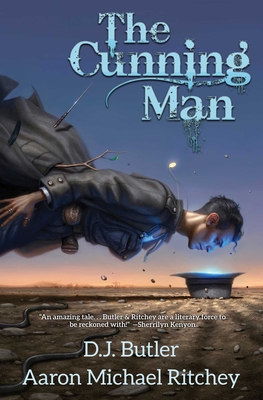 IT TAKES A CUNNING MAN TO SAVE A TOWN. "An amazing tale that grabs you by the throat and won’t let go! Butler & Ritchey are a literary force to be reckoned with! Hit that download button and grab your copy now! The Cunning Man will never let you go!"—Sherrilyn Kenyon, #1 New York Times Best-Selling Author

Behind the played-out farms and failed businesses are demons, curses, sorcerers, and unatoned wrongs. Bags of groceries and carpentry won’t be enough to save the day this time.This job will take a man who has known sorrow. A man who has known war. A man of wisdom. A man of magic.

THE JOB WILL TAKE A CUNNING MAN.

"An amazing tale that grabs you by the throat and won’t let go! Butler & Ritchey are a literary force to be reckoned with! Hit that download button and grab your copy now! The Cunning Man will never let you go!"—Sherrilyn Kenyon, #1 New York Times Best-Selling Author

". . . a brisk and engaging narrative...folk and religious based magic . . . for fans of urban or historical fantasy . . . a satisfying read."—Booklist

". . . a fascinating, grittily-flavored world of living legends. Hurry up and write the next one, Dave."—Cat Rambo

"Witchy Eye is a brilliant blend of historical acumen and imagination, a tour-de-force that is at once full of surprises and ultimately heart-warming. This is your chance to discover one of the finest new stars writing today!"–David Farland

D.J. (“Dave”) Butler grew up in swamps, deserts, and mountains. After messing around for years with the practice of law, he finally got serious and turned to his lifelong passion of storytelling. He now writes adventure stories for readers of all ages, plays guitar, and spends as much time as he can with his family. He is the author of City of the Saints, Rock Band Fights Evil, Space Eldritch, and Crecheling from Wordfire Press, and Witchy Eye, Witchy Winter, and Witchy Kingdom from Baen Books. Read more about Butler and his writing at http://davidjohnbutler.com, and follow him on Twitter: @davidjohnbutler.