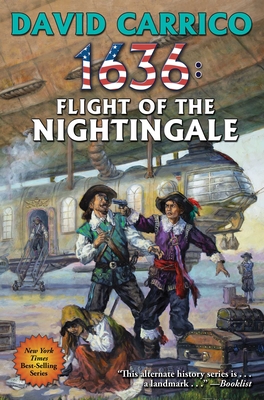 TWO SHORT NOVELS SET IN ERIC FLINT'S BEST-SELLING RING OF FIRE SERIES from David Carrico, coauthor of 1636: The Devil's Opera and The Span of Empire.

In “The Flight of the Nightingale” down-timer Francesca Caccini is inspired by the arrival of Grantville to seek a different destiny from what would have been her lot in a future without the up-timer intrusion—that is, to die with a reputation as a brilliant composer and performer, but to later be essentially forgotten by all but the cognoscenti. And in “Bach to the Future,” Johann and his brothers commit themselves to preserve, protect, and promote their family’s heritage from the future, even if in this future there will be no Johann Sebastian Bach!

David Carrico made his first professional SF sale to The Grantville Gazette e-magazine in 2004. His stories have also appeared in the Grantville Gazette and Ring of Fire anthologies from Baen Books and in Jim Baen's Universe e-magazine. Baen Books published Carrico's e-book story collection 1635: Music and Murder, as well as two novels written in collaboration with Eric Flint: 1636: The Devil's Opera and The Span of Empire, which was nominated for the 2017 Dragon Award for Best Military SF or Fantasy novel.
Loading...
or support indie stores by buying on
(This book is on backorder)