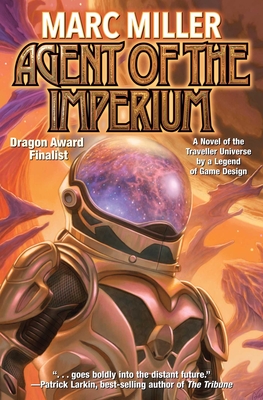 Agent of the Imperium

TO SAVE THE GALAXY, A DEAD HERO MUST RISE AGAIN! NEWLY REVISED AND EXPANDED NOVEL SET IN THE TRAVELLER UNIVERSE FROM LEGENDARY GAME DESIGNER MARC MILLER

Jonathan Bland is a Decider, empowered by the Emperor himself to deal with the inevitable crises of an empire. In the service of the Empire, he has killed more people than anyone in the history of Humanity, to save a hundred times as many. He died centuries ago, but they reactivate his recorded personality whenever a new threat appears. When the crisis is over, they expect he will meekly return to oblivion.

He has other ideas.

The chronicle of Bland reveals secrets of the history of the star-spanning Third Imperium and spans 400 years from early Imperium (about year 300) through the mid-post Civil War period (about year 700) touching known and unknown events you may have encountered in your own reading of the Imperium: everyday events, political intrigue, deadly dangers, Arbellatra, Capital, Encyclopediopolis, the Karand's Palace, and a Tigress-class Dreadnought.

If you know the Traveller science-fiction role-playing game, then some of this is already familiar; if not, no matter—this story introduces the vast human-dominated interstellar empire of the far future in ways only the designer and chronicler of this particular universe can.

Marc Miller is an award-winning game designer with experience reaching back forty years. He has published more than seventy titles and hasn't yet stopped.

He playtested John Hill’s original Squad Leader; he once slept overnight in Jim Dunnigan’s office; he (well, his company) published a game by Gary Gygax. He designed one of the Europa Series games. He once won a Hunt For Red October naval miniatures game refereed by Tom Clancy. He was a founding member of the legendary Game Designers’ Workshop?

He designed Traveller, the best-selling science-fiction role-playing game of all time.

Marc lives in Illinois with his wife, Darlene .
Loading...
or
Not Currently Available for Direct Purchase