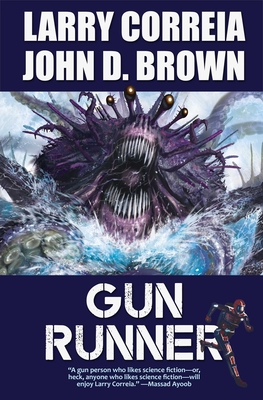 The Heart of a Warrior

Once, Jackson Rook was a war hero. Raised from boyhood to pilot an exosuit mech, he’d fought gallantly for the rebellion against the Collectivists. But that was a long time ago, on a world very far away.

Now, Jackson Rook is a criminal, a smuggler on board the Multipurpose Supply Vehicle Tar Heel. His latest mission: steal a top-of-the-line mech called the Citadel and deliver it to the far-flung planet Swindle, a world so hostile even the air will kill you. The client: a man known only as the Warlord. Rook has been in the smuggling business long enough to know that it’s best to take the money and not ask questions. But Rook cannot stand by and watch as the Warlord runs roughshod over the citizens of Swindle, the way the Collectivists did on his homeworld. For all his mercenary ways, Rook is not a pirate. And deep within the smuggler, the heart of a warrior still beats.

“Correia piles on the intrigue, action, and cliffhangers in the invigorating second Saga of the Forgotten Warrior epic fantasy. . . . Correia also weaves in elements that question the value of belief and the cost of giving authority to those who find more profit in preying on the weak. . . . Brisk fight scenes, lively characters, and plenty of black humor continue to make this series a real pleasure.” —Publishers Weekly

“I loved the book, it was great, fast paced, with wonderful characters, and also a lot of wonderful scenes that screamed to be painted.” —Larry Elmore, legendary award-winning artist and cover artist for Son of the Black Sword.

“Servant delivers solid pacing, a great setting, and a smart story that breaks away from genre conventions.”—Brandon Sanderson

“A provocative, suspenseful beginning of a new series.” —Booklist

“A book that copies nothing I have read before and which goes its own way brilliantly.” —David Drake

“I will say, in utter candor, that Servant is a work that truly stands out from other fantasy books on the market. What makes this book work so well is that it’s a story about family first, and a fantasy adventure second.” —Orson Scott Card's Intergalactic Medicine Show

Larry Correia is the creator of the Wall Street Journal and New York Times best-selling Monster Hunter International series, with first entry Monster Hunter International, as well as urban fantasy hardboiled adventure saga The Grimnoir Chronicles, with first entry Hard Magic, and epic fantasy series The Saga of the Forgotten Warrior, with first entry Son of the Black Sword. He is an avid gun user and advocate who shot on a competitive level for many years. Before becoming a full-time writer, he was a military contract accountant, and a small business accountant and manager. Correia lives in Utah with his wife and family.

John D. Brown writes action-packed thrillers and epic fantasies with characters you want to cheer for. He currently lives with his wife and four daughters in the hinterlands of Utah where one encounters much fresh air, many good-hearted ranchers, and the occasional wolf.
Loading...
or
Not Currently Available for Direct Purchase