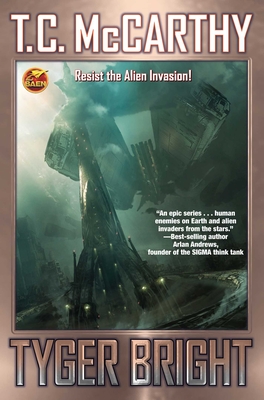 San Kyarr is a noviate within a secretive holy order tasked by Fleet to infiltrate the home world of mankind’s most dangerous enemy: the Sommen. If caught, her mission could bring war to Earth—long before its forces are ready.

When a competing faction within Fleet learns of the clandestine assignment and sends her own brother to destroy her, San is set on a journey toward destinies far greater than she ever imagined. As she evolves into a mysterious woman with the powers to send and receive quantum messages, she achieves humanity’s most unattainable dream of instantaneous interstellar communication.

About prequel Tyger Burning:
“Fans of space opera will enjoy this first book of what promises to be an epic series, as Maung battles human enemies on Earth and alien invaders from the stars.” —Arlan Andrews

About T.C. McCarthy:
“McCarthy perfectly catches the attitudes of veterans among themselves and toward civilians—laymen, better—when they get back to the World.” —David Drake

“It's not just good . . . it's the mil-sf book I wish I could send back in time to beat out Forever War for a Hugo. I never would have guessed McCarthy was an analyst . . . I was sure he'd been on the pointy end for a long time.” —Ernest Lilley, SF Revu

“The highly detailed, brutal depiction of futuristic warfare brilliantly complements the intimate narrative, which examines the insanity of war and those personally affected by it. Breathtaking and heartrending, this is the future of military science fiction.” —Publishers Weekly (starred review)

“A well written novel that makes you consider the costs of war in very personal terms.” —SF Signal