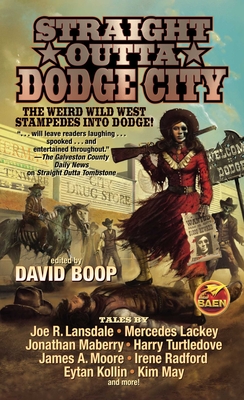 THE WEIRD WILD WEST IN ALL ITS GLORY. . . AND GORY!

It’s the final showdown between heroes and darkness in the Old West. Humans versus monsters. Supernatural beings versus greater evils—with a dinosaur or two thrown in for fun. Come explore the untold myths of the west—but no dying on the trail!

GHOST RIDERS IN THE SKY—AND ON THE PRAIRIES AND PLAINS, TOO!

About Straight Outta Dodge City:
“A dark, diverting anthology of 14 original tales, the third in a series. . . . By tossing weird fiction concepts into western settings, these tales give rise to unusual what-ifs. . . . the ever-enjoyable Joe R. Lansdale is on hand with 'The Hoodoo Man and the Midnight Train,' an energetic tale of a mystical gunfighter, and Harry Turtledove presents the delightful 'Junior & Me,' set in an alternate world in which evolution favored reptiles rather than mammals, and the ornery galoot narrating the yarn is actually a highly evolved dinosaur. The result is an amusing . . . bunch of stories.”—Publishers Weekly

About Straight Outta Tombstone:
“The authors were having fun. Even when they are not playing the stories for laughs, they are taking an opportunity to . . . tell a story with a fresh twist, and expand out of their expected boundaries.”—The Galveston County Daily News

David Boop is an award-winning essayist, recent Summa Cum Laude in creative writing (earned for a weird western piece), and former acquisition editor for both Flying Pen Press and Lifevest Publishing. David has been a journalist, actor, disc jockey, and stand-up comedian. He’s published across several genres, but specializes in weird westerns. Additionally, David has done media tie-in work for the Green Hornet, Veronica Mars, and the pulp hero the Black Bat (heavily disputed inspiration for Batman). He has collaborated with Kevin J. Anderson, the late C.J. Henderson, Peter J. Wacks, and Josh Vogt. He is a member of the Western Writers of America, the International Association of Media Tie-in Writers, the Horror Writers Association, and the Society of Children’s Book Writers and Illustrators.
Loading...
or support indie stores by buying on