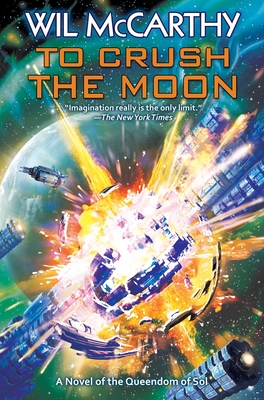 To Crush the Moon (Queendom of Sol #3)

CONCLUSION TO THE GROUNDBREAKING QUEENDOM OF SOL SERIES

Once the Queendom of Sol was a glowing monument to humankind’s loftiest dreams. Ageless and immortal, its citizens lived in peaceful splendor. But as Sol buckled under the swell of an "immorbid" population, space itself literally ran out. . . .

Conrad Mursk has returned to Sol on the crippled starship Newhope. His crew are the frozen refugees of a failed colony at Barnard’s Star. A thousand years older, Mursk finds Sol on the brink of rebellion, while a fanatic necro cult is reviving death itself. Now Mursk and his lover, Captain Xiomara “Xmary” Li Weng, are sent on a final, desperate mission by King Bruno de Towaji—one of the greatest terraformers of the ages—to literally crush the moon. If they succeed, they’ll save billions of lost souls. If they fail, they’ll strand humanity between death and something unimaginably worse. . . .

About Wil McCarthy:
“McCarthy is an entertaining, intelligent, amusing writer, with Heinlein's knack for breakneck plotting and, at the same time, Clarke's thoughtfulness.”—Booklist

Previously a flight controller for Lockheed Martin Space Launch Systems and later an engineering manager for Omnitech Robotics and founder/president/CTO of Raven Brick LLC, McCarthy hold patents of his own in seven countries, including twenty-nine issued U.S. patents in the field of nanostructured optical materials.
Loading...
or
Not Currently Available for Direct Purchase