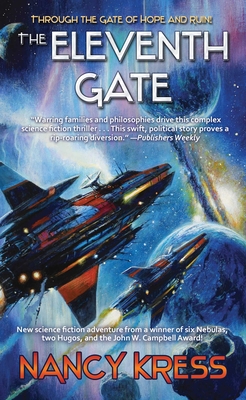 SEEK BEYOND THE ELEVENTH GATE

No one wants the city-states of the Eight Worlds to repeat the Terran Collapse by going to war. But when war accidentally breaks out, everyone seeks ways to exploit it for gain. The Landry and Peregoy ruling dynasties see opportunities to grab territory, increase profits, and settle old scores. The downtrodden underclasses use war to fuel rebellion. And suddenly ambitious heirs across the Eight Worlds can finally topple their elders’ regimes—or try to.

The key to victory and peace lies with two unlikely allies: Philip Anderson, a philosopher who seeks only the transcendent meaning of universal physics; and Tara Landry, the spoiled and defiant youngest granddaughter of an ancient dynasty. First Tara accidentally discovers an eleventh stargate. Next, Philip figures out how to use it. Now everything is about to change for the Eight Worlds—for through the gate lies a planet of danger and mystery. Will what lies beyond lead to the ultimate collapse of civilization or to a new transcendent order? The answer lies somewhere behind the Eleventh Gate!

About The Eleventh Gate:

"Nancy Kress at her very best . . . A first-contact novel like no other."—Greg Bear on Tomorrow's Kin

"It's a rare and desirable hybrid: a literary, military, hard-SF novel."—Amazon.com on Probability Moon

“Nancy Kress is one of the best science-fiction writers working today."—Kim Stanley Robinson

Nancy Kress is the author of thirty-three books, including twenty-six novels, four collections of short stories, and three books on writing. Her work has won six Nebulas, two Hugos, a Sturgeon, and the John W. Campbell Memorial Award, and has been translated into two dozen languages, including Klingon. In addition to writing, Kress often teaches at various venues around the country and abroad, including a visiting lectureship at the University of Leipzig, a 2017 writing class in Beijing, and the annual intensive workshop Taos Toolbox, which she teaches every summer with Walter Jon Williams.
Loading...
or
Not Currently Available for Direct Purchase