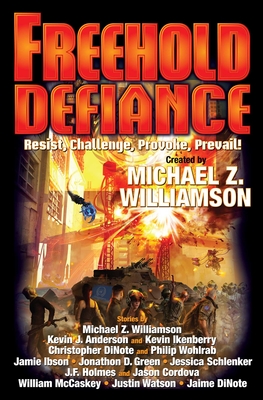 Everyone has a different war. For some in the UN Peacekeeping mission to Grainne, the struggle is just to survive. For others, it's to remain sane, or keep one's friends and comrades physically and mentally intact. When the rules of engagement are in constant flux, and orders are unclear or based on false information, just getting back inside the fence can be an accomplishment.

For the rebels of the Freehold of Grainne, they must form an organized force from the shattered remnants of their military, and from grimly determined, but underequipped and outnumbered insurgents. Their war is for their very way of life. They'll do everything and anything to stop this invasion, using whatever means are available. They mean to make the enemy suffer. Quod vulnera curare potes. “Because physical wounds heal.”

“. . . a rousing collection . . . this anthology will be enjoyed by anyone who enjoys military fiction.” —James W. Rawles, New York Times best-selling author and creator of SurvivalBlog

Michael Z. Williamson is retired military, having served twenty-five years in the U.S. Army and the U.S. Air Force. He was deployed for Operation Iraqi Freedom and Operation Desert Fox. Williamson is a state-ranked competitive shooter in combat rifle and combat pistol. He has consulted on military matters, weapons, and disaster preparedness for Discovery Channel and Outdoor Channel productions, and is editor-at-large for SurvivalBlog, which has 300,000 weekly readers. In addition, Williamson tests and reviews firearms and gear for manufacturers. Williamson’s books set in his Freehold Universe include Freehold, The Weapon, The Rogue, Better to Beg Forgiveness . . ., Do Unto Others . . ., and When Diplomacy Fails . . .. He is also the author of time-travel novel A Long Time Until Now, as well as The Hero—the latter written in collaboration with New York Times best-selling author John Ringo. Williamson was born in England, raised in Liverpool and Toronto, Canada, and now resides in Indiana with his wife and children.
Loading...
or support indie stores by buying on