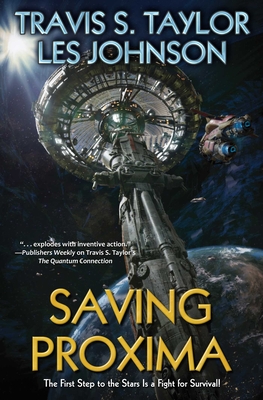 A message from space leads to a desperate race against time and across space to our nearest stellar neighbor in a new hard science fiction thriller from Travis S. Taylor and Les Johnson.

2072. At the lunar farside radio observatory, an old-school radio broadcast is detected, similar to those broadcast on Earth in the 1940s, but in an unknown language, coming from an impossible source—Proxima Centauri. While the nations of Earth debate making first contact, they learn that the Proximans are facing an extinction-level disaster, forcing a decision: will Earth send a ship on a multiyear trip to render aid?

Interstellar travel is not easy, and by traveling at the speeds required to arrive before disaster strikes at Proxima, humans will learn firsthand the time-dilating effects of Einstein’s Special Relativity and be forced to ponder ultimate questions: What does it mean to be human? What will it take to share the stars with another form of life? What if I return younger than my own children? The answers are far from academic, for they may determine the fate of not one, but two, civilizations.

About Stellaris: People of the Stars, coedited by Les Johnson:
“[A] thought-provoking look at a selection of real-world challenges and speculative fiction solutions. . . . Readers will enjoy this collection that is as educational as it is entertaining.”—Booklist

“This was an enjoyable collection of science fiction dealing with colonizing the stars. In the collection were several gems and the overall quality was high.”—Tangent

About Mission to Methone, by Les Johnson:
“The spirit of Arthur C. Clarke and his contemporaries is alive and well in Johnson’s old-fashioned first-contact novel, set in 2068. . . . includes plenty of realistic detail and puts fun new spins on familiar alien concepts. . . . There’s a great deal here for fans of early hard SF.”—Publishers Weekly

“With equal parts science fiction and international intrigue. . . . an exciting, fast-paced read that you will not want to put down.”—Booklist

About Rescue Mode, by Ben Bova and Les Johnson:
“. . . a suspenseful and compelling narrative of the first human spaceflight to Mars.”—Booklist

Dr. Travis S. Taylor heads up the cast of The Secret of Skinwalker Ranch and can be seen on The Machines that Built America on the History Channel. He has worked on various programs for the Department of Defense and NASA for the past twenty years. His expertise includes advanced propulsion concepts, very large space telescopes, space-based beamed-energy systems, future combat technologies, and next-generation space launch concepts. Taylor is also the author of pulse-pounding, cutting-edge science fiction novels, including the highly popular One Day on Mars, Tau Ceti Agenda, and the groundbreaking Warp Speed series. He is a regular on the History Channel’s Life After People and The Universe series.

Les Johnson is a physicist and the author of The Spacetime War; Mission to Methone; Rescue Mode (coauthored with Ben Bova); and Saving Proxima (coauthored with Travis S. Taylor). He is also the coeditor of the science/science fiction anthologies Going Interstellar and Stellaris: People of the Stars. He was technical consultant for the movies Europa Report and Lost in Space and has appeared in numerous documentaries on the Discovery and Science channels. Johnson was also the featured “Interstellar Explorer” in National Geographic Magazine and interviewed for Science Friday. By day, he serves as solar sail principal investigator of NASA’s first interplanetary solar sail missions and leads research on various other advanced space propulsion technologies at the George C. Marshall Space Flight Center in Huntsville, Alabama.
Loading...
or support indie stores by buying on