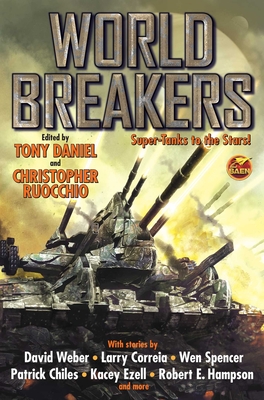 These are the hallmarks of the AI tank. Formed from cold steel and superpowered computing brains, these gigantic tanks with the firepower of an entire army have been the decisive factors in interplanetary battle. But are humans worthy of the extraordinary instruments of war that they have created? Are the World Breakers the greatest protector of human liberty, or its worst threat? For, while these World Breakers very definitely have minds of their own, the question remains: within their iron and superluminal quantum breasts, does there lie a faithful heart? Stories of world breakers and world makers in the great tradition of Keith Laumer’s Bolos from David Weber, Larry Correia, Wen Spencer, and more!

About World Breakers:
"'Dyma Fi’n Sefyll' by David Weber may be the finest MilSF short story I have ever read in the fifty-seven years I have been reading science fiction. It alone is worth the price of the book."—Tangent

About Star Destroyers, edited by Tony Daniel & Christopher Ruocchio:
“. . . spectacular space battles and alien contacts . . . themes of military ethics, the uses of artificial intelligence, and the limits of the capacity of the human mind. . . . it is the human interactions and decisions that ultimately drive the stories. . . . will appeal to fans of military and hard science fiction and any readers fascinated by the possibilities of space travel.”—Booklist

Tony Daniel is an editor at Regnery Books and a former senior editor at Baen. He is the author of more than a dozen science fiction novels.

Christopher lives in Raleigh, North Carolina with his wife, Jenna.
Loading...
or support indie stores by buying on