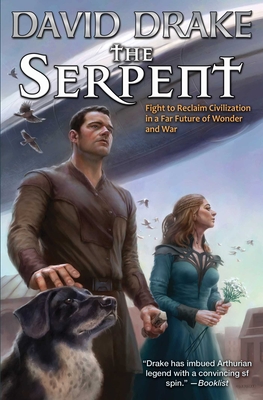 The Serpent (Time of Heroes #3)

Jon of Dun Add has created a civilization where before there had only been isolated pockets of humanity in a shattered cosmos.

Young knight Pal is one of the most respected members of Lord Jon’s Hall of Champions. But Pal’s greatest talent lies not on the field of battle, though he’s no slouch there. He is also a Maker, one who can repair the tools the Ancients had left--sometimes. Moreover, he has learned to use his warrior dog’s ability to predict motion better than any human could, an ability that has saved his skin and won the day more than once.

Now, Pal will need all his talent—as a fighter, as a Maker, as a Champion—to deal with the monsters the Waste throws at him—and to deal with his fellow humans. For there are those who would destroy Dun Add, and Lord Jon’s vision of a humanity united in peace, from within….

“. . . a wonderful cast of characters in a fabulous world of courtiers, peasants, Beasts, and mysterious Envoys. Drake has imbued Arthurian legend with a convincing sf spin.”—Booklist