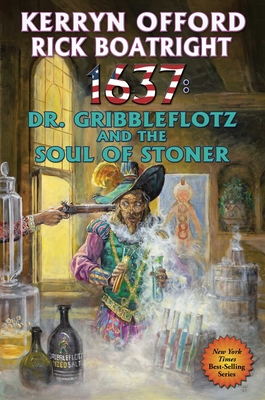 Dr. Gribbleflotz and the Soul of Stoner (Ring of Fire #33)

SCIENCE AND MEDICINE VS. FLIM-FLAMMERY

Thomas "the Great Stoner" Stone once performed miraculous surgery upon Phillip Theophrastus Gribbleflotz, the World’s Greatest Alchemist, using his bare hands, no anesthesia, producing no pain, and leaving no scar. It would have been wonderful if it was real.

But  Dr. Tom Stone, the face of modern medicine, has been engaging in fake treatments—bringing all modern medicine into question. Phillip, who has learned a thing or two about actual science from those uptime elopers from Grantville, West Virginia, decides to go to Padua and turn his problems into Tom Stone's problems.

Meanwhile, the wily Bernardo Ponzi has assembled a team to support his evangelical touring roadshow featuring a light show, faith healing and yet more psychic surgery. Now Gribbleflotz and Stone are on a collision course with the Magnificent Ponzi, who has moved beyond showman-like fakery to causing actual harm to many people. It’s time for Gribbleflotz and Stone to resolve their differences, debunk one of history’s greatest bunko artists, and save the reputation of modern science and medicine from ruin!

About Eric Flint’s Ring of Fire series:
“This alternate history series is … a landmark…” —Booklist

Kerryn Offord stumbled onto the 1632 universe in the beginning of 2003 when his father asked him to look up when 1633 would be released in paperback. He discovered Baen's Bar and has been active in the 1632 conferences ever since. He has had more than 50 stories published in the Grantville Gazette and has plans for many more. Although Dr. Gribbleflotz is Rick Boatright's creation, Kerryn lays claim to creating Dr. Phil.

Rick Boatright is exactly the same age as Bill Gates and, like Bill, has been a software developer since the early 1970s, but in Rick's case, a developer for not-for-profit social service agencies. He's been a moderator of online forums as long as online forums have existed. Since 2001 he's been a writer and editor, as well as the Head Geek, for Eric Flint's 1632 alternate history world. He also held the Head Geek title for Jim Baen's Universe magazine. He is the perpetrator of the annual "Weird Tech" lectures associated with the 1632 minicon and was the creator of Ring of Fire series character, Dr. Gribbleflotz, the world's greatest alchemist.
Loading...
or support indie stores by buying on