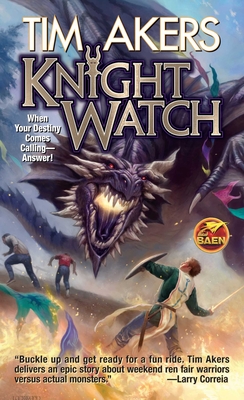 John Rast went to the Ren Faire looking for a fight. Well, a simulated fight, with blunt swords and safety equipment. But when his final opponent turns into a living, fire-breathing dragon, it’s John or nothing stopping a disaster in its tracks—and the only real weapon at hand is his mom’s Volvo. So John decides to let it roll . . .

About Knight's Watch:
“Buckle up and get ready for a fun ride. Tim Akers delivers an epic story about weekend ren faire warriors versus actual monsters. Best fictional use of a Volvo station wagon ever.”—Larry Correia

Tim Akers grew up in rural North Carolina, the last in a long line of Scottish bankers, newspaper editors, and tourist trap barons. He moved to Chicago to pursue his passion for apocalyptic winters, tornadic summers, and traffic. He stayed for the hot dogs.
Loading...
or support indie stores by buying on