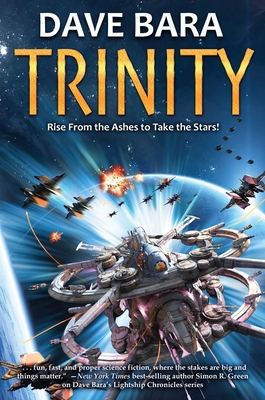 The Rim rebellion was glorious—and doomed from the start. Brilliant Rim Confederation Navy spaceship captain Jared Clement skuttled his career and professional life by joining the rebels against the overwhelming force of the 5 Suns Alliance. The rebel cause was just. That didn’t matter. Ten years later, Clement regrets nothing, but would prefer to be left alone to his thoughts and drink. But a new chance to command a ship of incredible potential is thrust in his lap—humanity’s first truly faster-than-light vessel. The destination: Trinity, a newly discovered star system where strange signs of possible spacefarers may lead to humanity’s first alien encounter. Or to interstellar war. Humanity is on the brink of a new age, and everything depends on one crusty starship captain, his gritty crew, and the Beauregard, a ship that was never meant to wage war turned into a weapon-bristling battleship that will either propel humanity to ultimate destruction—or into a new starfaring age of exploration and conflict. And along the way, a noble lost cause—one Captain Jared Clement—may finally get his revenge. And find his redemption.

About Trinity:
“[A] rousing. . . far-future tale, taking hard-drinking former Rim Confederacy Navy Capt. Jared Clement of the gunship Beauregard into a whopper of a galactic confrontation. . . . [with] Clement’s rebirth as an idealistic military commander, leading to breathless Horatio Hornblower–type ship-to-ship action updated into a Star Trek–like environment. . . [with] plenty of fun, derring-do, and even some tension-relieving fraternization will keep readers invested in Clement and crew. This is an entertaining escape from the here and now.”—Publishers Weekly

“This energetic mélange of tried-and-true elements—futuristic jargon, military and romantic tactics, and multiple levels of skullduggery—easily grabs the reader’s attention; more impressive is that Bara’s story holds that attention all the way to the end.” —Publishers Weekly on The Lightship Chronicles Series

“Bara manages to ramp up the depth and complexity of his world while retaining that sense of excitement, suspense, and adventure.” —Barnes & Noble Sci Fi & Fantasy Blog

Dave Bara is the author of The Lightship Chronicles Series including Impulse, Starbound, and Defiant. His other works include Saint Cochrane's World, Speedwing and stories in anthologies Infinite Stars, Star Destroyers, and The Chronicles of the Davids. Dave grew up as a fan of the Gemini and Apollo space programs and dreamed of being an astronaut one day. Since that time he has restricted his journeys into space to the written word. He lives in the Pacific Northwest. His web page is: http://www.davebara.info/
Loading...
or support indie stores by buying on