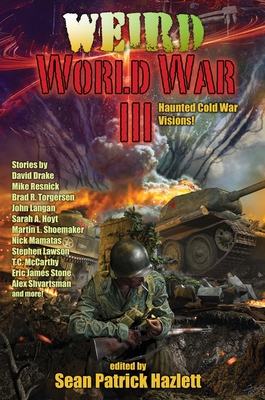 What if the United States had gone to war with the Soviet Union? What if these rival superpowers had fought on land, sea, air — and the astral plane? What if the Soviets and Americans had struggled for dominion across parallel dimensions or on the surface of the moon? How would the world have changed? What wonders would have been unveiled? What terrors would have haunted mankind from those dark and dismal dimensions? Come closer, peer through a glass darkly, and discover the horrifying alternative visions of World War III from some of today’s greatest minds in science fiction, fantasy, and horror.

“He’s one of the most talented authors I've ever read.”—Larry Correia on Brad R. Torgersen

“[A] tour de force: logical, built from assumptions with no contradictions . . . gripping.”—Jerry Pournelle on Sarah A. Hoyt

“Lostetter remains at the forefront of innovation in hard science fiction.”—Publishers Weekly on Marina J. Lostetter

Sean Patrick Hazlett is an Army veteran, speculative fiction writer and editor, and finance executive in the San Francisco Bay area. He holds an AB in history and BS in electrical engineering from Stanford University, and a master's degree in public policy from the Harvard Kennedy School of Government. As a cavalry officer serving in the elite 11th Armored Cavalry Regiment, he trained various Army and Marine Corps units for war in Iraq and Afghanistan. Sean is a 2017 winner of the Writers of the Future Contest. More than forty of his short stories have appeared in publications such as The Year’s Best Military and Adventure SF, Year’s Best Hardcore Horror, Terraform, Galaxy’s Edge, Writers of the Future, Grimdark Magazine, Vastarien, and Abyss & Apex, among others. He is an active member of the Horror Writers Association and Codex Writers’ Group. Sean Patrick Hazlett’s award-winning short story, “Adramelech” appeared in the Wall Street Journal bestselling anthology, Writers of the Future: Volume 33. This anthology is his first.
Loading...
or support indie stores by buying on
(This book is on backorder)