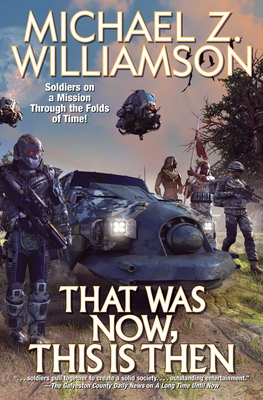 That Was Now, This Is Then

IN A FOLLOW-UP TO GROUNDBREAKING A LONG TIME UNTIL NOW, MASTER OF MILITARY SF MICHAEL Z. WILLIAMSON SENDS EPOCH-DISPLACED SOLDIER SEAN ELLIOTT AND HIS CREW ON A RESCUE MISSION WITHIN THE FOLDS OF TIME ITSELF.

SOLDIERS OUT OF TIME

Then: First Lieutenant Sean Elliott and nine other mixed-service U.S. soldiers on a convoy in Afghanistan suddenly found themselves and their MRAP vehicle thrown back to Earth’s Paleolithic Age. And they were not alone. Displaced Romans, Neolithic Europeans, and more showed up as well. Some would be allies. Some became deadly foes.

Now: Scientists from an almost unimaginably far future need the survivors’ advice and support to reconnoiter and ultimately recover other groups displaced in time. The problem is not all of those other groups want to be recovered or even understand where they are. Prehistory is an ugly place, fascinating to visit, but no place for a civilized person to live. But the future, gorgeous as it is, has a darker side that dampens the appeal. In the end, only inventiveness, grit, and a thirst for freedom from the fickle tides of time can keep Sean and the displaced Americans alive and on a path to finally find a place—and a time—to call home.

About That Was Now, This Is Then:
“. . . a classic story of survival. They may not like each other, but must to depend upon each other. Williamson shows how they pull together to create a solid society. . . . outstanding entertainment. Each character is different and fully developed. Even those you may dislike seem worth caring about. . . . grabs readers from the beginning and keep them reading to the end.”—The Galveston County Daily News

Michael Z. Williamson is retired military, having served twenty-five years in the U.S. Army and the U.S. Air Force. He was deployed for Operation Iraqi Freedom and Operation Desert Fox. Williamson is a state-ranked competitive shooter in combat rifle and combat pistol. He has consulted on military matters, weapons, and disaster preparedness for Discovery Channel and Outdoor Channel productions, and is editor-at-large for SurvivalBlog, which has 300,000 weekly readers. In addition, Williamson tests and reviews firearms and gear for manufacturers. Williamson’s books set in his Freehold Universe include Freehold, The Weapon, The Rogue, Better to Beg Forgiveness . . ., Do Unto Others . . ., and When Diplomacy Fails . . .. He is also the author of time-travel novel A Long Time Until Now, as well as The Hero—the latter written in collaboration with New York Times best-selling author John Ringo. Williamson was born in England, raised in Liverpool and Toronto, Canada, and now resides in Indiana with his wife and children.
Loading...
or support indie stores by buying on