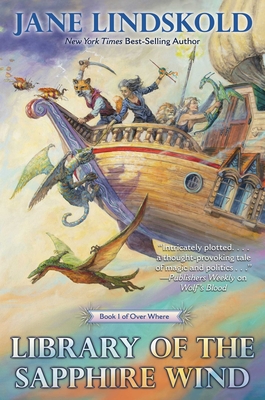 Library of the Sapphire Wind (Over Where)

Instead of mentors, they got monsters . . . That’s what Xerak, Vereez, and Grunwold think when three strange creatures shimmer into being within the circle of Hettua Shrine. Their conclusion is reasonable enough. After all, they’ve never seen humans before. As for Margaret Blake, Peg Gallegos, and Tessa Brown—more usually known as Meg, Peg, and Teg—they’re equally astonished but, oddly enough, better prepared. Then there is the mysterious verse that Teg speaks as they arrive, words that seem to indicate that the Shrine must have been at least partially responding to the request made of it.

Despite doubts on all sides, the three unlikely mentors join forces with the three young “inquisitors” and venture out into the world Peg dubs “Over Where.” First they must find the Library of the Sapphire Wind, destroyed years before. Will they find answers there, or is this only the first stage in their search?

About OverWhere:
"Library of the Sapphire Wind is classic Lindskold... If you’re looking for a well-written book with a fascinating cast of characters moving through an inventive and wondrous world, look no further."—The Magazine of Fantasy & Science Fiction

"The older adventurers add some freshness to the setup, while the animal-headed youngsters charm. This vivid, magical tale is sure to please."—Publishers Weekly

"It expertly balances the thoughtful maturity of its older protagonists with the eager energies of its young ones... Combine that with its infectious sense of wonder, and it becomes something the fantasy world needs more of.?"—H.P. Holo, best-selling author of the Monster Punk Horizon series

About Jane Lindskold:
"Lindskold is one of those authors who write all sorts of books, slipping through various subgenres with the confident stride of a born storyteller who refuses to be pigeon-holed."—The Magazine of Fantasy & Science Fiction

“Lindskold delivers an exotic historical fantasy that takes the reader from Victorian England to Egypt.” —Publishers Weekly on The Buried Pyramid

“I loved it. A thrilling, edge-of-the-seat read—I couldn't put it down!” —Tamora Pierce on Fire Season (cowritten with David Weber)

Jane Lindskold is the award-winning, New York Times best-selling author of more than twenty-five novels. Lindskold has also written in collaboration with David Weber and Roger Zelazny. When she’s not writing or reading, she’s likely being ordered around by a variety of small animals. Lindskold lives in New Mexico.
Loading...
or support indie stores by buying on