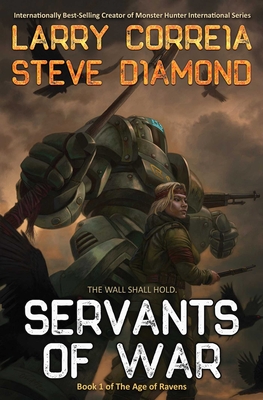 HORROR IN THE TRENCHES

The war between Almacia and the Empire of Kolakolvia is in its hundredth year. Casualties heap even higher on both sides as the conflict leaves no corner of the world untouched.

Illarion Glaskov’s quiet life on the fringes of the empire is thrown into chaos when tragedy strikes his village. When he is conscripted into the Tsarist military, he is sent to serve in The Wall—an elite regiment that pilots suits of armor made from the husks of dead golems.

But the great war is not the only—or even the worst—danger facing Illarion, as he is caught in a millennia-old conflict between two goddesses. In order to triumph, he must survive the ravages of trench warfare, horrific monsters from another world, and the treacherous internal politics of the country he serves.

About Servants of War:
"Servants of War is a gritty, militaristic fantasy that is both engrossing and scary as hell... It gripped me from the beginning and consumed most of a Sunday for me... It’s exactly what people want in dark fantasy, and I wholeheartedly recommend it to anyone who is looking for that sort of thing."—Warped Factor

About Larry Correia:
“Correia piles on the intrigue, action, and cliffhangers in the invigorating second Saga of the Forgotten Warrior epic fantasy. . . . Correia also weaves in elements that question the value of belief and the cost of giving authority to those who find more profit in preying on the weak. . . . Brisk fight scenes, lively characters, and plenty of black humor continue to make this series a real pleasure.” —Publishers Weekly

“I loved the book, it was great, fast paced, with wonderful characters, and also a lot of wonderful scenes that screamed to be painted.” —Larry Elmore, legendary award-winning artist and cover artist for Son of the Black Sword

About Steve Diamond:
”Residue will scare you—that’s its primary goal—but along the way it will touch you, shock you, make you laugh, make you cheer, and make you think. Horror has been waiting for Steve Diamond.” — Dan Wells

Larry Correia is the creator of the Wall Street Journal and New York Times best-selling Monster Hunter International series, with first entry Monster Hunter International; as well as urban fantasy hardboiled adventure saga The Grimnoir Chronicles, with first entry Hard Magic; and epic fantasy series The Saga of the Forgotten Warrior, with first entry Son of the Black Sword. He is an avid gun user and advocate who shot on a competitive level for many years. Before becoming a full-time writer, he was a military contract accountant, and a small business accountant and manager. Correia lives in Utah with his wife and family.

Steve Diamond founded and runs the review site Elitist Book Reviews (www.elitistbookreviews.com), which was nominated for the Hugo Award in 2013, 2014, and 2015. He writes for Ragnarok, Baen, Privateer Press, and numerous small publications. He is also the editor of the horror anthology Shared Nightmares.
Loading...
or support indie stores by buying on