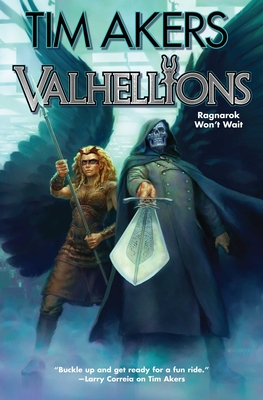 AN AGENT OF KNIGHT WATCH, TASKED TO PROTECT HUMANITY FROM SUPERNATURAL ENEMIES, MUST GO TO HELL AND BACK TO CLEAR HIS NAME AND SAVE THE WORLD

When John Rast signed up for Knight Watch, he expected it to be all fighting dragons and rescuing maidens. You know, hero stuff. But instead he’s stuck patrolling game conventions and cosplayer competitions, looking for dangerous anachronisms and the villains who may be trying to exploit them. Fortunately, all that changes when an honest-to-goodness necromancer shows up wielding a weapon created by Nazi occultists and accompanied by some badass evil Valkyries, hell-bent on kicking off the end of the world.

John and the team will go to great lengths—even Minnesota—to find out who’s responsible for all this and foil their plans. Also, there’s a giant dog who thinks the moon is a ball. It’s epic.

About Knight's Watch:
“Buckle up and get ready for a fun ride. Tim Akers delivers an epic story about weekend ren faire warriors versus actual monsters. Best fictional use of a Volvo station wagon ever.” —Larry Correia

About Tim Akers:
“A must for all epic fantasy fans.” —Starburst

“Take a bit of fantasy, mix in the horror of the demonic, and put in some top-notch writing and you’ll have Akers’ latest novel.” —Hellnotes

Tim Akers grew up in rural North Carolina, the last in a long line of Scottish bankers, newspaper editors, and tourist-trap barons. He moved to Chicago to pursue his passion for apocalyptic winters, tornadic summers, and traffic. He stayed for the hot dogs.
Loading...
or support indie stores by buying on