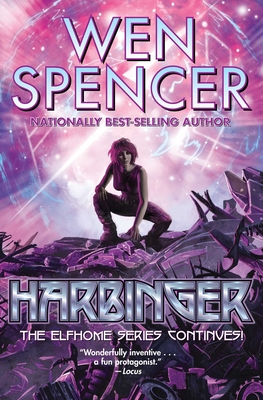 The war against the oni heats to a flashpoint even as Tinker learns that the enemy has a dangerous new weapon, the nactka. What’s more, the Stone Clan has sent its most famous warlords, the Harbingers, to take control of the allied war effort. Are these elves friends or foes? Tinker’s newfound baby siblings are up for grabs. The babies, though, are wood sprites and aren’t going to take things lying down. Team Mischief go!

About Wen Spencer:
“Each and every character is fascinating, extraordinarily well-developed, and gets right under your skin. . . . A terrific, memorable story.” —Julie E. Czerneda, author of In the Company of Others

“Spencer takes her readers on a fast-paced journey into disbelief. [Her] timing is impeccable and the denouement stunning.” —Romantic Times (four-star review)

John W. Campbell Award Winner Wen Spencer resides in paradise in Hilo, Hawaii, with two volcanoes overlooking her home. According to Spencer, she lives with “my Dalai Lama-like husband, my autistic teenage son, and two cats (one of which is recovering from mental ilnness)—all of which makes for very odd home life at times.” Spencer's love of Japanese anime and manga flavors her writing. Her novel Tinker won the 2003 Sapphire Award for Best Science Fiction Romance and was a finalist for the Romantic Times Reviewer’s Choice Award for Fantasy Novel. Her Wolf Who Rules was a top Pick by Romantic Times and given their top rating of four and a half stars. Other Baen books include Endless Blue and Eight Million Gods. The Elfhome series includes Tinker, Wolf Who Rules, Elfhome, Wood Sprites, Project Elfhome, and Harbinger.
Loading...
or support indie stores by buying on