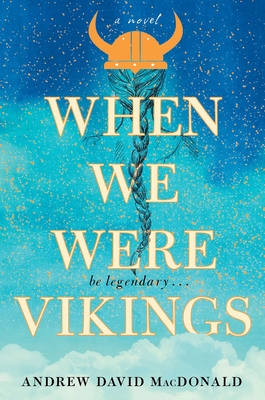 “I could not put this book down. Readers rarely have the opportunity to see the world through the eyes of someone with a disability and experience their lives in a meaningful way. We rarely see people with Down syndrome or fetal alcohol syndrome depicted as truly feeling, flesh-and-blood people who experience love, lust, heartbreak, and disappointment, who face challenges as they strive for their dream. Zelda is my new hero! She is undaunted and unflappable as she grapples with her dreams and life experiences. Your journey with her will be all too brief, but it is one that will stay with you long after you read the last page.”
— Rebecca Gottberg, Rediscovered Books, Boise, ID
View the List

A heart-swelling debut for fans of The Silver Linings Playbook and The Curious Incident of the Dog in the Night-Time.

Sometimes life isn’t as simple as heroes and villains.

When We Were Vikings is an uplifting debut about an unlikely heroine whose journey will leave you wanting to embark on a quest of your own, because after all...

We are all legends of our own making.