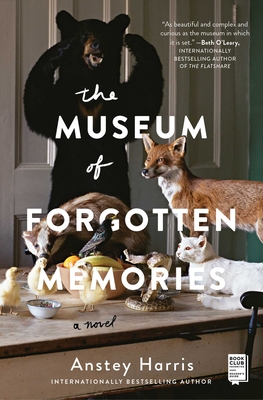 The Museum of Forgotten Memories (Paperback)

At Hatters Museum of the Wide Wide World, where the animals never age but time takes its toll, one woman must find the courage to overcome the greatest loss of her life.

Cate Morris thought she’d met her match in Simon at university—until she laid eyes on his best friend, Richard. Cate and Richard felt an immediate and undeniable spark, but Richard also felt the weight of the world more deeply than most.

Now, four years after Richard’s suicide, Cate is let go from her teaching job and can’t pay the rent on the London flat she shares with her and Richard’s son, Leo. She packs the two of them up and ventures to Richard’s grandfather’s old Victorian museum in the small town of Crouch-on-Sea, where the dusty staff quarters await her. Despite growing pains and a grouchy caretaker, Cate falls in love with the quirky taxidermy exhibits and sprawling grounds and makes it her mission to revive them. When the museum is faced with closure because of a lack of visitors, Cate stages a grand reopening, but threats from both inside and outside the museum derail her plans and send her spiraling into self-doubt.

As Cate becomes more invested in Hatters, she must finally confront the reality of Richard’s death—and the role she played in it—in order to reimagine her future. Perfect for fans of Katherine Center and Evvie Drake Starts Over.

Anstey Harris teaches creative writing in Kent, England. Her short stories have been widely published in anthologies and online and she was the winner of the H.G. Wells Short Story Prize in 2015. Anstey lives in Kent, England, and is the mother of singer-songwriter Lucy Spraggan.
or support indie stores by buying on
Copyright © 2020 American Booksellers Association