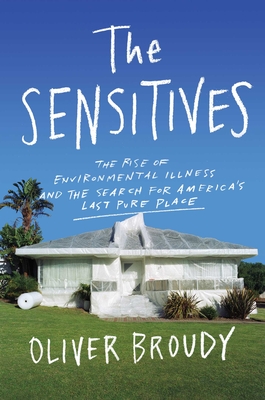 A compelling exploration of the mysteries of environmental toxicity and the community of “sensitives”—people with powerful, puzzling symptoms resulting from exposure to chemicals, fragrances, and cell phone signals, that have no effect on “normals.”

They call themselves “sensitives.” Over fifty million Americans endure a mysterious environmental illness that renders them allergic to chemicals. Innocuous staples from deodorant to garbage bags wreak havoc on sensitives. For them, the enemy is modernity itself.

No one is born with EI. It often starts with a single toxic exposure. Then the symptoms hit: extreme fatigue, brain fog, muscle aches, inability to tolerate certain foods. With over 85,000 chemicals in the environment, danger lurks around every corner. Largely ignored by the medical establishment and dismissed by family and friends, sensitives often resort to odd ersatz remedies, like lining their walls with aluminum foil or hanging mail on a clothesline for days so it can “off-gas” before they open it.

Broudy encounters Brian Welsh, a prominent figure in the EI community, and quickly becomes fascinated by his plight. When Brian goes missing, Broudy travels with James, an eager, trusting sensitive to find Brian, investigate this disease, and delve into the intricate, ardent subculture that surrounds it. Their destination: Snowflake, the capital of the EI world. Located in eastern Arizona, it is a haven where sensitives can live openly without fear of toxins or the judgment of insensitive “normals.”

While Broudy’s book is wry, pacey, and down-to-earth, it also dives deeply into compelling corners of medical and American history. He finds telling parallels between sensitives and their cultural forebears, from the Puritans to those refugees and dreamers who settled the West. Ousted from mainstream society, these latter-day exiles nonetheless shed bright light on the anxious, noxious world we all inhabit now.

Praise For The Sensitives: The Rise of Environmental Illness and the Search for America's Last Pure Place…

"With a tone that is both thoughtful and humorous, The Sensitives provides a model for how history, philosophy, research, clinical practice, and—above all—patient experience, inform meaningful discourse about a disease that resists characterization at all stages." —Science Magazine

"The Sensitives is at its best when Broudy is chronicling the very real challenges of his subjects....Broudy’s writing inspires real empathy for the individuals he chronicles, individuals who can’t seem to get well or get help." —The New York Times Book Review

"Thoroughly engaging....Broudy's momentum rarely flags as he whirls between empathy and skepticism. Neither an invective of medical politics, nor a sideshow of eccentric recluses, The Sensitives pleads for understanding in a fight over a syndrome not yet understood." —Shelf Awareness

Oliver Broudy is a freelance journalist living in western Massachusetts. He has written for Men’s Health, The New York Times, Mother Jones, and many other publications. His work has taken him to China, Afghanistan, New Zealand, and elsewhere. He has written about pop stars, sports stars, kung-fu, anarchy, and lots of weird medical conditions. He’s been a finalist for the National Magazine Award and his Amazon singles have twice been named best single of the year.
Loading...
or
Not Currently Available for Direct Purchase