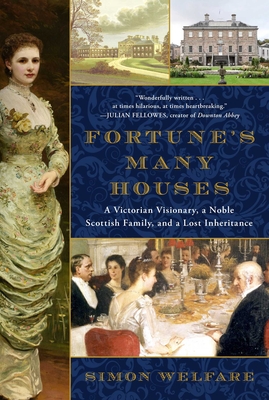 A Victorian Visionary, a Noble Scottish Family, and a Lost Inheritance

A unique and fascinating look at Victorian society through the remarkable lives of an enlightened and philanthropic aristocratic couple, the Marquess and Marchioness of Aberdeen, who tried to change the world for the better but paid a heavy price. This is a true tale of love and loss, fortune and misfortune.

In the late 19th century, John and Ishbel Gordon, the Marquess and Marchioness of Aberdeen, were the couple who seemed to have it all: a fortune that ran into the tens of millions, a magnificent stately home in Scotland surrounded by one of Europe’s largest estates, a townhouse in London’s most fashionable square, cattle ranches in Texas and British Columbia, and the governorships of Ireland and Canada where they lived like royalty.

Together they won praise for their work as social reformers and pioneers of women’s rights, and enjoyed friendships with many of the most prominent figures of the age, from Britain’s Prime Ministers to Oliver Wendell-Holmes and P.T. Barnum and Queen Victoria herself. Yet by the time they died in the 1930s, this gilded couple’s luck had long since run out: they had faced family tragedies, scandal through their unwitting involvement in one of the “crimes of the century” and, most catastrophically of all, they had lost both their fortune and their lands.

This fascinating family quest for the reason for their dramatic downfall is also a moving and colorful exploration of society in Victorian Britain and North America and an inspirational feast for history lovers.

Praise For Fortune's Many Houses: A Victorian Visionary, a Noble Scottish Family, and a Lost Inheritance…

"This is a wonderfully written, meticulous account, at times hilarious, at times heartbreaking, of a well-intentioned, charitable couple's journey on the Road to Ruin.  The book also tells us of a way of life, almost within living memory, and yet as far removed from our own as the time of the pharaohs, and shows how the Aberdeens achieved much good, at the price of their own financial survival.  In a way, Simon Welfare has written a parable of how that whole class of benevolent paternalists, the Eminent Victorians, so often thought they could spend forever for the benefit of others, without undermining  their own way of life, but they reckoned without the forces of the modern world that would engulf them.  It is sad, of course, to trace the decline of one of our greatest families, but much of what they did was inspiring, and while their descendants may have a legitimate gripe about their conduct, most of us should be grateful for their efforts."
— Julian Fellowes, creator of "Downton Abbey"

“With the feel of a real-life Brideshead Revisited, full of towering good deeds and devastating miscalculations, Fortune’s Many Houses is a fantastic fusion of biography and memoir. At its heart, Simon Welfare has placed his extraordinary family story of an aristocratic heroine who dazzled British high society while attempting to make the world a better - and kinder - place.”
— Gareth Russell, author of Young and Damned and Fair and The Ship of Dreams

“The riveting tale of how one of Victorian Britain’s golden couples rose to pre-eminence then lost everything. Ishbel and Johnny Aberdeen were on intimate terms with many of the key figures of the age, and their story is an extraordinary window into Victorian society. Theirs is a story so rich and absorbing it reads like fiction"
— Neil Oliver, author of Wisdom of the Ancients

"The Victorian John and Yoko...Simon Welfare spins out the do-good couple's saga with brio and warmth...a teeming portrait of the era."
— Air Mail

"I enjoyed every word of this biography...it is a wonderful, run-along on wheels read, an always engaging account of the efforts of a gallant couple to change, if not actually save the world."
— The Irish Catholic

Simon Welfare has had a long career as a television producer, working on a variety of programs, including the Mysterious World series with science writer Arthur C. Clarke. He lives in Scotland, married to the great-granddaughter of the first Marquess and Marchioness of Aberdeen, the subjects of his first biography Fortune’s Many Houses.
Loading...
or support indie stores by buying on