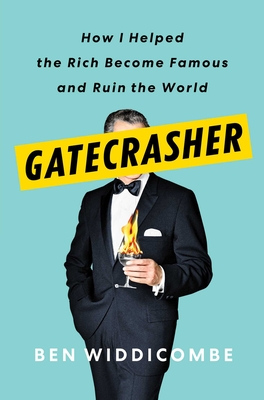 How I Helped the Rich Become Famous and Ruin the World

Ben Widdicombe is the only writer to have worked for Page Six, TMZ, and The New York Times—an unusual Triple Crown that allowed him personal access to the full gamut of Hollywood and high society’s rich and famous, from billionaires like Rupert Murdoch, Donald Trump, and the Koch brothers, to pop culture icons Kim Kardashian and Paris Hilton. Now, in Gatecrasher, New York’s premiere gossip-turned-society writer spills the sensational stories that never made it to print.

Widdicombe has appeared at nearly every gossip-worthy venue—from the Oscars and the Hamptons, to the Met Gala and Mar-a-Lago—and has rubbed elbows with a dizzying array of celebrities (and wannabes), and he whisks us past the clipboard and velvet rope to teach us the golden rules of gatecrashing, dishing on dozens of boldface names along the way.

Widdicombe shares secrets for how to crash the parties, climb the ladder, avoid the paparazzi, or make small talk with Henry Kissinger and Anna Wintour. Endlessly fun and extremely telling, Gatecrasher makes the unnerving argument that Paris Hilton conquering pop culture two decades ago lead to Donald Trump winning the White House. “As the gossip pages go, so goes the country,” he says.

Praise For Gatecrasher: How I Helped the Rich Become Famous and Ruin the World…

"This witty and insightful book suggests how the gossip journalism meant as entertainment has not only diminished “the impact of shame in public life.” It has also led to a grab for celebrity among America’s elites, who are using the fame they once eschewed to get “more of everything...A sharp-eyed and disturbing chronicle."—Kirkus (starred review)

"Whether you’re a student of US Weekly or cultural studies, Gatecrasher manages to be fun, frothy and just the #inspo you need to topple the bourgeoisie." —BookPage

"A fascinating and punchy account...This eye-opening account of a moment when 'being wealthy was becoming embraced as a sub-culture' will delight pop culture enthusiasts.” —Publishers Weekly

Widdicombe has spent two decades not only covering celebrity culture but also creating it...taking what could be mindless material and injecting it with a hilarious urgency."—Bloomberg

"Widdicombe’s arch tone and observational acumen make for...entertaining reading...What’s most interesting are his musings about the intertwining of wealth, fame, and politics, setting up his theory that Paris Hilton led directly to President Trump. Dish with a dash of straight talk."—BOOKLIST

Ben Widdicombe writes the weekly “No Regrets” social column in The New York Times Styles section and is a twenty-year veteran of the celebrity and society beat. A specialist in the intersection of high culture and pop culture, he is the only journalist who has worked for both The New York Times and TMZ.
Loading...
or
Not Currently Available for Direct Purchase