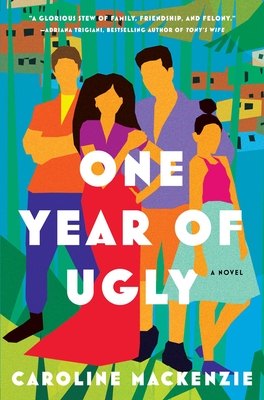 One Year of Ugly (Hardcover)

A fun, fresh, timely debut novel about the uproarious adventures that befall the Palacio family during their disastrous illegal residence in Trinidad that poignantly captures the complexities of dysfunctional families and passionate (but sometimes messy) romance.

After fleeing crumbling, volatile Venezuela, Yola Palacio wants nothing more than to settle into a peaceful new life in Trinidad with her family. And who cares if they’re there illegally—aren’t most of the people on the island? But life for the Palacios is far from quiet—and when Yola’s Aunt Celia dies, the family once again find their lives turned upside down. For Celia had been keeping a very big secret—she owed a LOT of money to a local criminal called Ugly. And without the funds to pay him off, Ugly has the entire family do his bidding until Celia’s debt is settled. What Ugly says, the Palacios do, otherwise the circumstances are too dreadful to imagine.

To say that the year that follows is tumultuous for the Palacios is an understatement. But in the midst of the turmoil appears Roman—Ugly’s distractingly gorgeous right-hand man. And although she knows it’s terrible and quite possibly dangerous, Yola just can’t help but give in to the attraction. Where, though, do Roman’s loyalties lie? And could this wildly inappropriate romance just be the antidote to a terrible year of Ugly?

Combining the spark of Imbolo Mbue with the irresistible wit of Maria Semple, One Year of Ugly brilliantly explores cross-cultural struggles and assimilation from a unique immigrant perspective and introduces us to an extraordinary new voice in contemporary fiction.

Caroline Mackenzie is a freelance translator living in Trinidad. She was shortlisted for the 2017 Commonwealth Short Story Prize and her nonfiction articles are regularly featured in regional magazines MACO People and MACO Caribbean Living. Her short fiction has been published in literary journals around the world. One Year of Ugly is her first novel.
or support indie stores by buying on
Copyright © 2020 American Booksellers Association