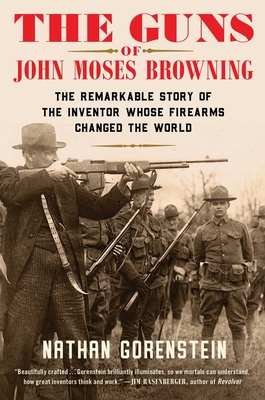 The Guns of John Moses Browning

The Remarkable Story of the Inventor Whose Firearms Changed the World

A “well-researched and very readable new biography” (The Wall Street Journal) of “the Thomas Edison of guns,” a visionary inventor who designed the modern handgun and whose awe-inspiring array of firearms helped ensure victory in numerous American wars and holds a crucial place in world history.

Few people are aware that John Moses Browning—a tall, humble, cerebral man born in 1855 and raised as a Mormon in the American West—was the mind behind many of the world-changing firearms that dominated more than a century of conflict. He invented the design used in virtually all modern pistols, created the most popular hunting rifles and shotguns, and conceived the machine guns that proved decisive not just in World Wars I and II but nearly every major military action since. Yet few in America knew his name until he was into his sixties.

Now, author Nathan Gorenstein brings firearms inventor John Moses Browning to vivid life in this riveting and revealing biography. Embodying the tradition of self-made, self-educated geniuses (like Lincoln and Edison), Browning was able to think in three dimensions (he never used blueprints) and his gifted mind produced everything from the famous Winchester “30-30” hunting rifle to the awesomely effective machine guns used by every American aircraft and infantry unit in World War II. The British credited Browning’s guns with helping to win the Battle of Britain.

His inventions illustrate both the good and bad of weapons.

Sweeping, lively, and brilliantly told, this fascinating book that “gun collectors and historians of armaments will cherish” (Kirkus Reviews) introduces a little-known legend whose impact on history ranks with that of the Wright Brothers, Thomas Edison, and Henry Ford.

Praise For The Guns of John Moses Browning: The Remarkable Story of the Inventor Whose Firearms Changed the World…

“A text gun collectors and historians of armaments will cherish.”

“An in-depth look at Browning’s development process…Gorenstein’s work strikes a balance between accessibility and lavish detail.”


“A meticulously detailed biography of the self-taught firearms inventor known as “the Thomas Edison of guns.”…. Gorenstein ably captures his subject’s work ethic and impressive natural gifts. This comprehensive account makes clear that Browning is a more crucial figure in world history than is widely known.”

“Revelatory…In his beautifully crafted, fast-paced narrative, Gorenstein not only gives us the singular life of Browning; he brilliantly illuminates, so we mortals can understand, how great inventors think and work.”
—Jim Rasenberger, author of Revolver: Sam Colt and the Six-Shooter That Changed America

"The furious complexity of the human species means that the word 'genius' can apply equally to the likes of Shakespeare, Einstein, Mozart — and John Moses Browning, whose revolutionary firearms designs resulted in world-changing weaponry…. Gorenstein explores, in intricate and granular detail, the nature and implications of his achievement."
—Julia Keller, Pulitzer Prize-winning author of Mr. Gatling's Terrible Marvel: The Gun That Changed Everything and the Misunderstood Genius Who Invented It

“Excellent….Gorenstein shows us the real man behind [the] famous name, as well as the family around him. Following Browning from his birth in rural Utah to his death in urban Belgium, we see how a changing world shaped his inventions, and how, in turn, his inventions shaped the changing world.”
—Ian McCollum, Editor, ForgottenWeapons.com

"Historians and firearms aficionados will revel in Nathan Gorenstein's meticulous portrait of the arms maker's life, which was devoted to revising, reworking, and tweaking to perfection blueprints he ‘saw’ in his head for a stunning array of weapons, including pistols, shotguns, and automatic rifles.”
—Larry Kahaner, author of AK-47: The Weapon that Changed the Face of War

"Very engaging…If you already know the difference between a ‘locked breech’ and ‘blowback’ pistol, here's a chance to understand the life of history’s premier gun designer.  If you haven’t encountered those phrases before, here's a chance to see how a guy growing up poor in a remote Western village became one of the greatest mechanical engineers of his time, transforming the world."
—Clayton E. Cramer, author of Lock, Stock, and Barrel: The Origins of American Gun Culture

“The perfect combination of technological and social history—a feat rarely attempted and even more rarely achieved with such thorough attention to detail.”
—Ashley Hlebinsky, former co-host of Discovery Channel’s Master of Arms and Founding President, Association of Firearms History and Museums

“The surprising story of a genius inventor who changed the course of American history. It will captivate readers interested in firearms and the process of innovation. I highly recommend it.”
—Paul M. Barrett, author of GLOCK: The Rise of America's Gun

Nathan Gorenstein is a former reporter and editor for The Philadelphia Inquirer, where he covered city and state politics and produced a wealth of groundbreaking work. He was previously a reporter for the Wilmington News Journal, where he led coverage of Sen. Joseph Biden’s first presidential campaign. He is also the author of Tommy Gun Winter, the story of a Boston gang from the 1930s that included an MIT graduate, a minister’s daughter, and two of Gorenstein’s own relatives. He currently lives in Philadelphia.
Loading...
or support indie stores by buying on