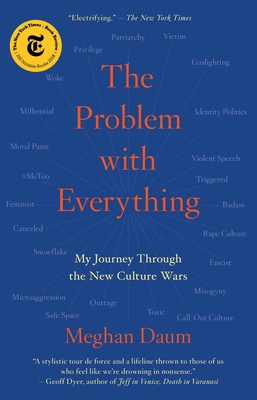 The Problem with Everything

My Journey Through the New Culture Wars

From “one of the most emotionally exacting, mercilessly candid, deeply funny, and intellectually rigorous writers of our time” (Cheryl Strayed, author of Wild) comes a seminal new book that reaches surprising truths about feminism, the Trump era, and the Resistance movement. You won’t be able to stop thinking about it and talking about it.

In the fall of 2016, acclaimed author Meghan Daum began working on a book about the excesses of contemporary feminism. With Hillary Clinton soon to be elected, she figured even the most fiercely liberal of her friends and readers could take the criticisms in stride. But after the election, she knew she needed to do more, and her nearly completed manuscript went in the trash. What came out in its place is the most sharply-observed, all-encompassing, and unputdownable book of her career.

In this gripping new work, Meghan examines our country’s most intractable problems with clear-eyed honesty instead of exaggerated outrage. With passion, humor, and most importantly nuance, she tries to make sense of the current landscape—from Donald Trump’s presidency to the #MeToo movement and beyond. In the process, she wades into the waters of identity politics and intersectionality, thinks deeply about the gender wage gap, and tests a theory about the divide between Gen Xers and millennials.

This signature work may well be the first book to capture the essence of this era in all its nuances and contradictions. No matter where you stand on its issues, this book will strike a chord.

Praise For The Problem with Everything: My Journey Through the New Culture Wars…

“… affectingly personal, achingly earnest, and something close to necessary.”
– Vogue.com

“an elegantly-composed treatise against tribalism and cancel culture that seamlessly weaves in personal anecdotes.”
– Elle

“Daum's writing is brave and engaging; she does some hard thinking about our times and demands that we do too.”
– Newsweek

“A book of thoughtful, provocative essays on everything from the Trump presidency to identity politics to generational differences and beyond. At a time when nuance of any kind is often dismissed, Daum offers thoughtful takes on hot-button topics.”
– The New York Post

“This book is the eloquent testament of a card-carrying feminist who abhors the stranglehold that political correctness has placed on intellectual life in America. As such, it is to be applauded—and I do.”
—Vivian Gornick, author of Fierce Attachments and The Odd Woman and the City

"The Problem with Everything has the brutal honesty and rawness that will leave you examining your own thoughts and beliefs about the culture we are living in today. It forces you to ask yourself the question: whose side am I really on, and why do I have to choose one? I love how this book pushes me to think harder and be smarter."
—Chelsea Handler, author of Life Will Be the Death of Me . . . and You too!

"For those who are outraged by the current political moment and yet are feeling weary from the outrage, for the Gen-Xers who got lost between generations, or really anyone feeling a little more lost than everyone they follow on Twitter, let Meghan Daum be your spiritual guide! She'll show you that it's possible to be alive in this political moment but in your own way."
—Hanna Rosin, host of NPR’s Invisibilia podcast

"Meghan Daum's observations will stand in the future as a perfect encapsulation of how social media has transformed educated people's sense of what it is to be moral in the 2010s. More to the point, this book shines a light on us right now, a brighter and more revealing one than anything on the Twittersphere."
—John McWhorter, author of Words on the Move and The Language Hoax

“Just when you thought feminist iconoclasm had gone into retreat or extinction, The Problem With Everything arrives, slicing through the intellectual murk of outrage culture and edgy online wokeness. Daum is a virtuoso at rueful insights and self-interrogation, willing to risk upending things in the knowledge that ‘safe spaces’ and safe ideas advance none of us.”
—Laura Kipnis, author of Unwanted Advances: Sexual Paranoia Comes to Campus

“Meghan Daum has a world-class BS detector. In elegant, incisive, often hilarious prose, she calmly applies it to the confusion and narcissism threatening so many of our most feverish, social media-driven debates. From the shifting terms of “fourth-wave” feminism to the paradoxes of privilege and the myopia of tribalism, The Problem with Everything probes a liberalism under assault from all fronts and in danger of falling apart from within. Nothing escapes Daum’s scrutiny—least of all herself.”
—Thomas Chatterton Williams, author of Self-Portrait In Black And White: Unlearning Race

“Showcasing both her sense of humor and her sense of outrage, Meghan Daum’s The Problem with Everything will make you laugh and it will make you think. In these polarized times, her call for nuance feels brave, and sorely necessary. Daum strides into that most challenging, confusing of places – the grey area – and forces us to confront and unpack its layers.”
—A.M. Homes, author of Days of Awe

”Daum, an old-school essayist more in the vein of Joan Didion and Nora Ephron than xoJane and Jezebel, says she will continue to tease out the nuances that exist all around us, even as doing so becomes increasingly... problematic.”
– The Stranger

Meghan Daum is the author of five books and writes a biweekly column about culture and politics for Medium. Her most recent book is The Unspeakable: And Other Subjects of Discussion, which won the 2015 PEN Center USA Award for creative nonfiction. Her other books include the essay collection My Misspent Youth, and she edited the New York Times bestseller Selfish, Shallow, and Self-Absorbed: Sixteen Writers on the Decision Not to Have Kids. From 2005 to 2016, Daum was an opinion columnist for the Los Angeles Times. She has contributed to numerous magazines, including The New Yorker, The Atlantic, The New York Times Magazine, and Vogue. A recipient of a 2015 Guggenheim Fellowship and a 2016 National Endowment for the Arts Fellowship, she is on the adjunct faculty in the MFA Writing Program at Columbia University School of the Arts.
Loading...
or support indie stores by buying on