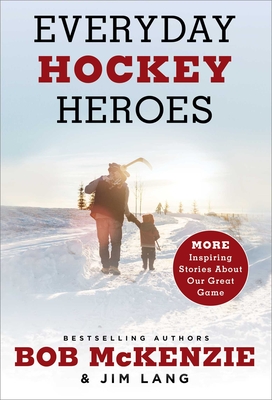 From TSN Hockey Insider Bob McKenzie comes a new collection of hockey stories about the everyday heroes from across the game who are defying the odds and championing the next generation of hockey—on and off the ice.

In this uplifting and entertaining volume of stories, Canadian broadcasters Bob McKenzie and Jim Lang bring together hockey players, coaches, and refs, as well as those behind the bench—the parents, scouts, analysts, and agents—to tell us, in their own voices, why they love the game and how they’re shaping its future.

Meet Dallas Stars’ winger Andrew Cogliano, who captivated the hockey world by playing 830 consecutive games, despite various injuries, and hear how hockey and his parents instilled in him the strong work ethic that made his streak possible. Learn about how Jeremy Rupke found his passion and created the popular website, How To Hockey, to help young hockey hopefuls who might not have money for professional lessons develop their on-ice skills and give them the confidence to achieve their dreams off the ice. Read about players like Jack Jablonski, who didn’t let a life-changing spinal cord injury at age sixteen stop him from being a part of the game, and is now using his experience to raise awareness and funds for spinal cord injury research. From LGBTQ players like Jessica Platt who are breaking down barriers to the women such as Danièle Sauvageau who are breaking glass ceilings as coaches, refs, agents, and analysts, these are the everyday heroes who are using hockey to inspire change.

Featuring incredible stories of comebacks, milestones, and friendship, Everyday Hockey Heroes, Volume II highlights the very best of hockey: the power it has to unite us to be the best we can be—for ourselves and for others.

“Why do we like competitive sports? The drama, the stories, the heroics—the stories behind the game. McKenzie and Lang feature people who talk about their love of the game and how they’re championing the next generation—paying particular attention to those working to make it inclusive.”
— Toronto Star

“A second volume of stories about the unsung stars around your neighbourhood rink.”
— Ottawa Sun

“Hockey never ceases to amaze me with the quality of the people in the game. This book is full of hockey champions who will inspire you and show you the true depth of the people in and around this game.”
— BRIAN BURKE, former NHL executive

“You can never truly know a country until you know the game that defines the people. The U.S. has football, Brazil soccer, India cricket. If you want to know Canada, or if you’re Canadian and want to know yourself, Everyday Hockey Heroes is for you. In these moving, inspirational, and entertaining stories, Bob McKenzie, the ‘Mr. Hockey’ of insight and analysis, and sportscaster extraordinaire Jim Lang have found the pulse of Canada—and the beat is as strong and healthy as ever.”
— ROY MacGREGOR, bestselling author of Wayne Gretzky's Ghost and The Home Team

“The Humboldt tragedy showed us just how much hockey is part of the Canadian community. Because, just as we share the joy hockey so often brings, that terrible moment in Saskatchewan taught us that together as a nation we comfort each other when the game, as it occasionally does, brings us pain. My friends Bob McKenzie and Jim Lang have a lifetime of stories from covering the great game, and these pages are wonderful evidence of what they’ve collected over the years. You’ll laugh at times, you’ll be inspired at times, and you may even cry as well, but through it all you’ll know that Canada is hockey and hockey is Canada. It really is our game.”
— PETER MANSBRIDGE

“Inspiring. Truly hard to put down. Bob’s great storytelling abilities prove that hockey is so much more than just a game. Loved it!”
— DAVID CHILTON, bestselling author of The Wealthy Barber

“Compelling accounts of personal strength and the power of hope. Everyday Hockey Heroes gives a spotlight to important issues that people are dealing with and exhibits their ability to not only overcome these obstacles but, more important, to try to make positive change in the wake of them.”
— SHELDON KENNEDY, former NHL player and founder of the Sheldon Kennedy Child Advocacy Centre

“Bob and Jim shed some fantastic light on a coast to coast truth: there are hockey heroes in every rink in Canada. Names like Westlake, St. Denis, Singh, Potvin, and Cunningham are what drives the success and our love of the game. Everyday Hockey Heroes reminds us that you don’t need to make a million to be a real hockey hero.”
— KEN REID, Sportsnet Central anchor and author of Hockey Card Stories 2

Bob McKenzie is a Canadian broadcaster, journalist, and author. Known as the TSN Hockey Insider, Bob has covered Canada’s favourite sport for forty years. He is the former editor-in-chief of The Hockey News, hockey columnist for the Toronto Star, and the author of three national bestsellers, including the first book in this series. He lives in Fenelon Falls, Ontario. Follow him on Twitter @TSNBobMcKenzie.

Jim Lang is a Canadian sportscaster, journalist, and the co-author of hockey memoirs by Tie Domi, Max Domi, Wendel Clark, and Brian Berard, as well as Everyday Hockey Heroes with Bob McKenzie. He hosts The Jim Lang Show. He lives outside Toronto with his wife and kids. Follow him on Twitter @JimLangSports.
Loading...
or support indie stores by buying on