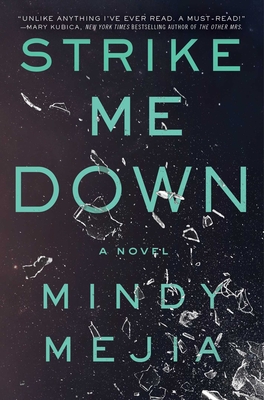 From the critically acclaimed author of Leave No Trace, the “nail-biting page-turner that grabs you early and never lets go” (The Real Book Spy), comes a visceral thriller where a high stakes crime triggers a woman’s complicated and potentially deadly search for the truth.

Nora Trier catches thieves. As a forensic accountant and partner in her downtown Minneapolis firm, she’s unearthed millions in every corner of the world. She prides herself on her independence, the most essential currency of accounting, until her firm is hired by Strike.

An anti-corporate, feminist athletic empire, Strike is owned by Logan Russo, a brash and legendary kickboxer, and her marketing genius husband, Gregg Abbott. They’re about to host a major kickboxing tournament with twenty million dollars in prize money, and the chance for the champion to become the new face of the company. Gregg suspects his wife already has a new face in mind—a young trainer named Aaden, for whom Logan feels an unexpected connection.

Days before the tournament begins, it’s discovered that the prize money is missing. Gregg hires Nora’s firm to find both the thief and the money but Nora has a secret connection to Strike that threatens her independence. Her partner pressures her into taking the case anyway, hinting he has information about Strike that could change the course of the investigation in a shocking and deadly way.

A tense and unpredictable thriller that will keep you guessing until the very last page, Strike Me Down reveals the remarkable power of Mindy Mejia’s writing which “crosses back and forth between exquisite literary descriptions and thrilleresque escapes and acts of violence” (New York Journal of Books).

Praise For Strike Me Down: A Novel…

"Whip-smart, expertly plotted and entirely unpredictable, STRIKE ME DOWN is unlike anything I’ve ever read. A must read!"
— Mary Kubica, New York Times bestselling author of THE OTHER MRS.

"A whip-smart thriller featuring a brilliant female protagonist, a finely-tuned plot and some truly spectacular writing. STRIKE ME DOWN delivers on every level."
— Cristina Alger, USA Today bestselling author of THE BANKER'S WIFE and GIRLS LIKE US

"One heck of a spectacular, original thriller. Mindy Mejia’s STRIKE ME DOWN is fast-paced, masterfully woven and wholly unexpected, with an ending that’ll make your jaw drop. An absolute must read."
— Hannah Mary McKinnon, bestselling author of HER SECRET SON and THE NEIGHBORS

"Part procedural, part domestic, this thriller has something for everyone."
— Wendy Heard, author of HUNTING ANNABELLE and THE KILL CLUB

"Mejia's narrative crackles with obsession, greed, lust, and plenty of ambition, and it's loaded with more twists and turns than a spy novel . . . A compelling and breathless page-turner."
— Kirkus Reviews

"A page turner of the first order."
— Bookpage

"With endless plot twists and turns, this thriller will have you guessing right up to the last page."
— Hunker.com

"In Mindy Mejia fashion, she stays one step ahead of us until the final page."
— Minneapolis Star Tribune

“A thrilling, gritty psychological suspense with a fascinating setting; you’ll be amazed at how riveting accounting is in Mejia’s hands.”
— MODERN MRS. DARCY

Mindy Mejia is a CPA and a graduate of the Hamline University MFA program. Her debut novel, The Dragon Keeper, was published by Ashland Creek Press in 2012. She lives in the Twin Cities with her family, and is the author of Strike Me Down, Everything You Want Me to Be, and Leave No Trace.
Loading...
or
Not Currently Available for Direct Purchase