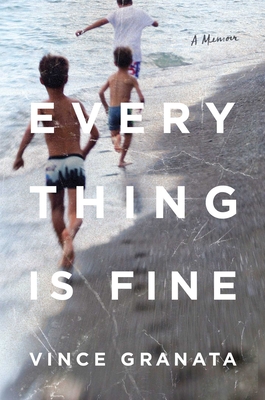 In this extraordinarily moving memoir about grief, mental illness, and the bonds of family, a writer delves into the tragedy of his mother’s violent death at the hands of his brother who struggled with schizophrenia. Perfect for fans of An Unquiet Mind and The Bright Hour.

Vince Granata remembers standing in front of his suburban home in Connecticut the day his mother and father returned from the hospital with his three new siblings in tow. He had just finished scrawling their names in orange chalk on the driveway: Christopher, Timothy, and Elizabeth.

Twenty-three years later, Vince was a thousand miles away when he received the news that would change his life—his younger brother, Tim, propelled by unchecked schizophrenia, had killed their mother in their childhood home. Devastated by the grief of losing his mother, Vince is also consumed by an act so incomprehensible that it overshadows every happy memory of life growing up in his seemingly idyllic middle-class family.

In this vibrant combination of personal memoir and journalism, Vince examines the disease that irrevocably changed his family’s destiny. As he painstakingly pieces together Tim’s story, Vince begins the process of recovering the image of his remarkable mother and salvaging his love for his brother.

Written in stark, precise, and beautiful prose, Everything Is Fine is a powerful and reaffirming portrait of loss and forgiveness.

Praise For Everything Is Fine: A Memoir…

"Although he writes of an unimaginable family tragedy, Vincent Granata’s Everything is Fine reads like a testament to life itself. Suffused with emotional depth and intellectual inquiry, this is a writer pushing the very limits of what language and love can capture: the suffering, certainly, but more so the astonishing power of forgiveness and survival. This book will never leave you.” —Rachel Louise Snyder, author of No Visible Bruises: What We Don’t Know About Domestic Violence Can Kill Us

“Granata's memoir of profound family tragedy is a monument to the work of remembering…In candid, smoothly unspooling prose, Granata reconstructs life and memory from grief, writing a moving testament to the therapy of art, the power of record, and his immutable love for his family.” —Booklist

“Moving…a memoir of an entire family—and a tragedy that forever changed its members.” —New York Post

"Granata’s skills, as a writer and former English teacher, shine here; he not only brings a personal perspective to living alongside a family member with mental illness, but also shows that there isn’t a right way to grieve. A welcome memoir." —Library Journal

Vince Granata received his BA in history from Yale University and his MFA in creative writing from American University. He has received fellowships from the Bread Loaf Writer’s Conference, Virginia Center for the Creative Arts, Brush Creek Foundation for the Arts, the I-Park Foundation, and the Ucross Foundation, and residencies from PLAYA and the MacDowell Colony. His work has appeared in The Massachusetts Review, The Chattahoochee Review, and Fourth Genre, and has been nominated for a Pushcart Prize and listed as Notable in Best American Essays 2018.
Loading...
or support indie stores by buying on