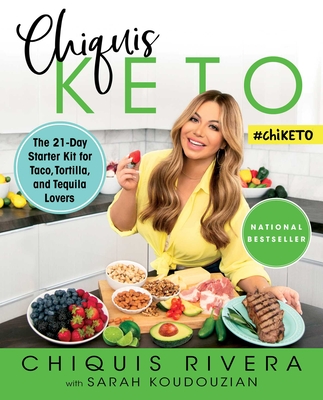 The 21-Day Starter Kit for Taco, Tortilla, and Tequila Lovers

The bestselling author and singer shares her personal brand of keto, including everything from recetas sabrosas to fun workouts and motivational personal stories to inspire all Latin-food lovers.

Let’s face it. Growing up Latina means tortillas, chips, rice, and beans are served with everything. Chiquis has tried almost every diet out there, but none felt satisfying or sustainable. That’s why she teamed up with her personal trainer, Sarah Koudouzian, to create Chiquis Keto, a realistic diet that helps her stay healthy while still enjoying her favorite dishes. Now Chiquis wants to share her mouthwatering recipes and workout routine with you to help kick-start your healthy lifestyle!

From tacos to tequila, Chiquis Keto is your 21-day starter kit to look and feel your best without sacrificing fun and flavor. Complete with Chiquis’s Chi-Keto Menu—featuring more than sixty meals, snacks, and drinks, like Chiquis’s keto-friendly Huevos Rancheros; Mexican Hot Chocolate Pudding; and Paloma Blanca, her version of a low-carb margarita—and Sarah’s workout plan, Chiquis Keto will help you tighten your curves while still enjoying your fave foods!

Janney Marin Rivera—better known as Chiquis—is an artist, entrepreneur, philanthropist, and television personality. She first captivated her audience on reality shows with her late mom, Jenni Rivera, and their family. Chiquis launched her music career in 2014, making her musical debut on international television at the Premios Juventud. Her 2015 memoir,?Forgiveness, was an instant?New York Times?bestseller. In 2020, Chiquis won her first Latin Grammy—her album Playlist, was named the best Banda record of the year. Chiquis lives in Los Angeles. Follow Chiquis on Facebook.com/ChiquisOficial, Instagram @Chiquis and @ChiquisKeto, Twitter @Chiquis626, and YouTube.com/ChiquisOnline.

Sarah Koudouzian is the CEO of BootyFit Workout, a celebrity personal trainer, and a philanthropist, with a bachelor’s degree in kinesiology from California State University, Northridge, as well as a certification in nutrition. Whether she’s working out with Chiquis, touring across the United States to train Prince Royce, or preparing former Miss Universe Dayanara Torres for Mira Quién Baila, Sarah believes that being fit is not about conforming to a specific look or size. It is about creating a healthy lifestyle. Sarah lives in California. Visit bootyfitworkout.com and follow Sarah on Facebook.com/Bootyfitworkout, Instagram @SarahKoudouzian, and YouTube.com/bootyfitworkout.
Loading...
or support indie stores by buying on