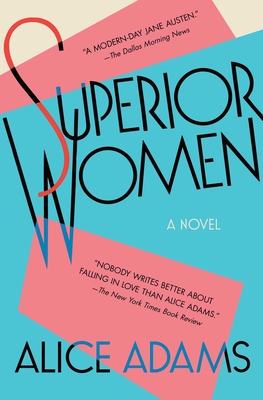 The timeless coming-of-age novel about five young women who meet at Radcliffe College and together grow to maturity—through intrigues, ambitions, affairs, and marriages—from World War II to the 1980s.

Lavinia, Peg, and Cathy seem to have little in common save for their freshman status. None of them could know that their destinies are about to inextricably intertwine.

Across four decades, as time and events upend their expectations, these five women discover their sexuality, reveal their secrets, and struggle with independence—sometimes surrendering, sometimes making stunning choices. Now reissued thirty-five years after its original release, Alice Adams’s Superior Women, hailed as “a remarkable compression of time, memory, and sentiment—rather as if Hemingway had been turned loose on Proust” (San Francisco Chronicle), is a richly drawn, uncompromising novel about women’s intimate, interior lives for fans of Mary McCarthy’s The Group and Rona Jaffe’s The Best of Everything.

Praise For Superior Women: A Novel…

“Nobody writes better about falling in love than Alice Adams.” —The New York Times Book Review

“No one wrote better about the tangled relations of men and women or about the enduring romance of friendship.” —Frances Kiernan

“Reads easily, even breathlessly. . . . The subtle but intensely felt shifts of closeness among the young women are lovingly and expertly laid bare.” —John Updike

Alice Adams was born in Virginia and graduated from Radcliffe College. Her short stories have appeared in twenty-two O. Henry Award collections and several volumes of Best American Short Stories, and she is also the author of ten highly praised novels. She has been the recipient of an Academy and Institute Award in Literature from the American Academy and Institute of Arts and Letters, and has received grants from the National Endowment for the Arts and the Guggenheim Foundation. Ms. Adams’s other novels include Superior Women; Almost Perfect, a New York Times Notable Book; and Medicine Men. She lived in San Francisco until her death in 1999.
Loading...
or
Not Currently Available for Direct Purchase