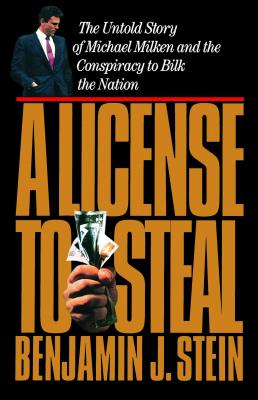 A License to Steal (Paperback)

This sobering, and at times terrifying, tale reveals how Michael Milken, called upon questionable financial backers and enrolled the influence of powerful figures in journalism, academia, and politics, to convince an eager—and greedy—nation that junk bonds were the key to untold wealth. Now Stein details how Milken became so powerful, who helped him, and how his junk-bond operation really worked.

Benjamin J. Stein is a respected economist who is known to many as a movie and television personality, but has worked more in personal and corporate finance than anywhere else. He has written about finance for Barron’s, The Wall Street Journal, The New York Times, and Fortune; was one of the chief busters of the junk-bond frauds of the 1980s; has been a longtime critic of corporate executives’ self-dealing; and has cowritten several finance books. Stein travels the country speaking about finance in both serious and humorous ways, and is a regular contributor to CBS’s Sunday Morning, CNN, and FOX News. He was the 2009 winner of the Malcolm Forbes Award for Excellence in Financial Journalism.
or support indie stores by buying on
Copyright © 2020 American Booksellers Association