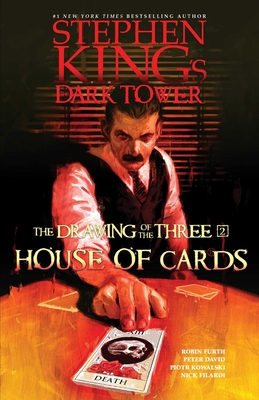 The Drawing of the Three #2)

Now, in the second in the graphic novel series adaptation Stephen King’s The Dark Tower: The Drawing of the Three, originally published by Marvel Comics in single-issue form and creatively overseen by Stephen King himself, the full story of Roland’s saga continues. Sumptuously drawn by Piotr Kowalski, Jonathan Marks, Juanan Ramirez, and Cory Hamscher, plotted by longtime Stephen King expert Robin Furth, and scripted by New York Times bestselling author Peter David, The Drawing of the Three adaptation is an extraordinary and terrifying journey—ultimately introducing a generation of new readers to Stephen King’s modern literary classic The Dark Tower, while giving longtime fans thrilling adventures transformed from his blockbuster novels.

Piotr Kowalski’s comic book work includes Stephen King’s The Dark Tower, Marvel Knights: Hulk, Robocop, and What If?: Age of Ultron, and is the co-creator of Sex with Joe Casey.
or support indie stores by buying on