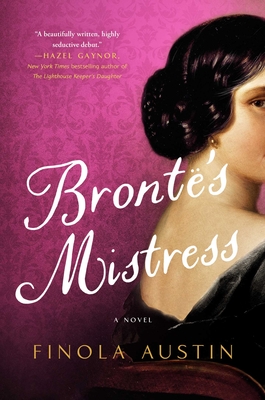 “A beautifully written, highly seductive debut….The chemistry between Branwell and Lydia positively crackles on the page….Masterful storytelling which is sure to delight fans of the Brontës and of historical fiction.” –Hazel Gaynor, New York Times bestselling author of The Lighthouse Keeper’s Daughter

This dazzling debut novel for fans of Mrs. Poe and Longbourn explores the scandalous historical love affair between Branwell Brontë and Lydia Robinson, giving voice to the woman who allegedly corrupted her son’s innocent tutor and brought down the entire Brontë family.

Yorkshire, 1843: Lydia Robinson—mistress of Thorp Green Hall—has lost her precious young daughter and her mother within the same year. She returns to her bleak home, grief-stricken and unmoored. With her teenage daughters rebelling, her testy mother-in-law scrutinizing her every move, and her marriage grown cold, Lydia is restless and yearning for something more.

All of that changes with the arrival of her son’s tutor, Branwell Brontë, brother of her daughters’ governess, Miss Anne Brontë and those other writerly sisters, Charlotte and Emily. Branwell has his own demons to contend with—including living up to the ideals of his intelligent family—but his presence is a breath of fresh air for Lydia. Handsome, passionate, and uninhibited by social conventions, he’s also twenty-five to her forty-three. A love of poetry, music, and theatre bring mistress and tutor together, and Branwell’s colorful tales of his sisters’ elaborate play-acting and made-up worlds form the backdrop for seduction.

But Lydia’s new taste of passion comes with consequences. As Branwell’s inner turmoil rises to the surface, his behavior grows erratic and dangerous, and whispers of their passionate relationship spout from her servants’ lips, reaching all three protective Brontë sisters. Soon, it falls on Lydia to save not just her reputation, but her way of life, before those clever girls reveal all her secrets in their novels. Unfortunately, she might be too late.

Meticulously researched and deliciously told, Brontë’s Mistress is a captivating reimagining of the scandalous affair that has divided Brontë enthusiasts for generations and an illuminating portrait of a courageous, sharp-witted woman who fights to emerge with her dignity intact.

Praise For Bronte's Mistress: A Novel…

“Brontë’s Mistress gives us a fascinating new perspective on one of literature’s most famous families. Smart and sexy, this captivating novel is true to the romantic spirit of the Brontës themselves, with a modern feminist twist. A delicious treat for Brontë fans!” —ELIZABETH BLACKWELL, author of Red Mistress and On A Cold Dark Sea

“Lydia Robinson, the married woman with whom Branwell Brontë allegedly had an affair, tells her own side of the story in Finola Austin's beautifully written and meticulously researched novel, Brontë's Mistress. Austin's Lydia—unhappily married, affection-starved, and unfulfilled—is exquisitely nuanced. I felt deeply for her, even as I was frustrated by some of her choices. The affair with Branwell is merely one facet in a finely-cut gem of a larger story. Austin's great strength is that she is able to write so that both Lydia's own strengths and weaknesses seamlessly coexist, creating a thoroughly, beautifully, complicatedly human character. Brontë's Mistress gives voice to a woman who, until now, has been voiceless; and, indeed, to thousands of women whose lives, like Lydia's, were so terribly suffocating.” —MOLLY GREELEY, author of The Clergyman's Wife

“A richly atmospheric, compelling portrait of a woman torn between expectation and the wish for more. Brontë's Mistress stayed with me long after I put it down." —MEGAN CHANCE, author of A Drop of Ink

“Finola Austin's debut novel is a stunner. Anyone who has ever thrilled to a Brontë novel needs to read this glorious historical novel about the Brontë sisters and their brother, Branwell, and his affair with the outrageous, scandalous woman who broke all conventions. Atmospheric and beautifully imagined, this is a must-read for lovers of great historical fiction.”—JEANNE MACKIN, author of The Last Collection: A Novel of Elsa Schiaparelli and Coco Chanel

“Confident, convincing and engrossing, and with a sure historical touch, it illuminates another dark corner in the Brontës' story.” —GILL HORNBY, author of Miss Austen

"Bronte's Mistress is a beautifully written, highly seductive debut in which Finola Austin delves into the life of a relatively unknown member of the Brontë family. The chemistry between Branwell and Lydia positively crackles on the page, and while Lydia emerges as a delicious heroine in her own right, the better-known Brontë sisters are portrayed with wit and care. Masterful storytelling which is sure to delight fans of the Brontës and of historical fiction. Brontë’s Mistress comes highly recommended by this Yorkshire lass." —HAZEL GAYNOR, New York Times bestselling author of The Lighthouse Keeper's Daughter

"Dark and moody, Brontë’s Mistress unearths the secret love affair of Lydia Robinson and Branwell Brontë in all its shocking scandalousness. Anchored by meticulous research, Finola Austin has created a heart-tugging portrait of a passionate woman more akin to Emma Bovary than Jane Eyre, but equally trapped by the constraints of her era. Bittersweet and beautifully written.” —KRIS WALDHERR, author of The Lost History of Dreams and Doomed Queens

"Rich in heart and detail, Finola Austin’s novel Bronte’s Mistress is a beautifully created tour-de-force. This tightly-woven novel could reflect the life any number of middle- and upper-class Victorian women bound by English society’s rules, but it happens to concern the woman whose extra-marital affair with Charlotte Bronte’s brother, Branwell Bronte, rocked not only their own lives but the closely-knit society in which they lived. Using a plethora of research sources, Austin has written a beautifully-created novel whose every character (save for a horse!) is based on the actual historical persons involved in the events." —SARAH SHOEMAKER, author of Mr. Rochester

"At the heart of Finola Austin's Brontë's Mistress isn't that literary family, of whom readers to this day entertain a cult-like fascination, but Mrs. Lydia Robinson, a protagonist as passionate as she is multifaceted and complex. Romance, sex, love in its many variations, enough grief and drama to rival a Greek play—it's all here. The result is a delicious and truly escapist read, which resonates with this lesson from Austin: Women are the true and unsung survivors of history." —KATHERINE J. CHEN, author of Mary B

"Finola Austin's Brontë's Mistress is a page-turning read full of passion and fire. The life stories of the famous Bronte siblings, Charlotte, Emily, Branwell, and Anne, have been chronicled in depth by countless biographers, and now and then in works of fiction. But an important aspect of Branwell Bronte's life—his life-altering, doomed love affair with the infamous Mrs. Robinson, an older woman whose son he was tutoring—has never been examined in such depth before, and makes a tantalizing read." —SYRIE JAMES, author of The Secret Diaries of Charlotte Brontë

"Offer this to fans of Victorian literature, readers who like their historical fiction populated with real people, and those who don't require that their romances have happy endings." —BOOKLIST

"A convincingly multifaceted picture of Lydia, a smart, passionate woman who is caught between her own thwarted desires and the gears of society’s conventions. Austin grounds her book in research, but it’s the entirely fictional letters she intersperses throughout the book that truly bring Lydia and many of her other characters to life. Austin has written a stirring defense of the maligned Mrs. Robinson, and who can say if it isn’t also the truth?" —THE CHRISTIAN SCIENCE MONITOR

"An engaging tale of a woman caught up in the prejudices and restrictions of her time. Brontë's Mistress is more than a romance novel . . . with its rich patima of historical detail, [it is] an intriguing novel that explores the plight of an intelligent, sexual woman in an era when neither quality was acceptable." —DENVER POST

Finola Austin, also known as the Secret Victorianist on her award-winning blog, is an England-born, Northern Ireland-raised, Brooklyn-based historical novelist and lover of the 19th century. By day, she works in digital advertising. Find her online at FinolaAustin.com.
Loading...
or support indie stores by buying on