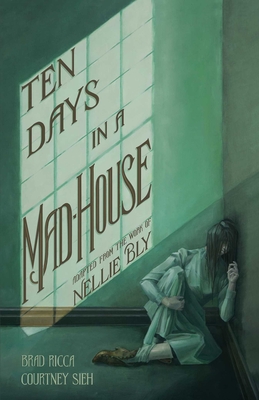 Ten Days in a Mad-House

Beautifully adapted and rendered through piercing illustrations by acclaimed creators Brad Ricca and Courtney Sieh, Nellie Bly’s complete, true-to-life 19th-century investigation of Blackwell Asylum captures a groundbreaking moment in history and reveals a haunting and timely glimpse at the starting point for conversations on mental health.

While working for Joseph Pulitzer’s newspaper in 1887, Nellie Bly began an undercover investigation into the local Women’s Lunatic Asylum on Blackwell Island. Intent on seeing what life was like on the inside, Bly fooled trained physicians into thinking she was insane—a task too easily achieved—and had herself committed. In her ten days at the asylum, Bly witnessed horrifying conditions: the food was inedible, the women were forced into labor for the staff, the nurses and doctors were cruel or indifferent, and many of the women held there had no mental disorder of any kind.

Now adapted into graphic novel form by Brad​ Ricca and vividly rendered with beautiful and haunting illustrations by Courtney Sieh, Bly’s bold venture is given new life and meaning. Her fearless investigation into the living conditions at the Blackwell Asylum forever changed the field of journalism. A timely reminder to take notice of forgotten populations, Ten Days in a Mad-House warns us what happens when we look away.

Praise For Ten Days in a Mad-House: A Graphic Adaptation…

“Sieh’s detailed ink drawings, reminiscent of 19th-century etchings, coupled with a hard-boiled adaptation by Ricca, retell the groundbreaking journalism of Bly, a reporter who went undercover to expose abuses at Blackwell’s Asylum in 1887….this history bears repeating.” —Publishers Weekly

“A beautifully hand-drawn adaptation….Sieh’s black-and-white drawings heighten the tension of Blackwell’s by casting all the doctors and nurses in imperious shadow. Nellie and her fellow patients’ wide, expressive eyes communicate the terror they feel within the institution. This graphic adaptation of reportage would appeal to fans of Joe Sacco and Sarah Glidden.” —Booklist

"An important and vital piece of journalism... We need vivid works such as Nellie Bly’s." —Medium

“There should be no doubt in any historian’s mind that Nellie Bly was a pioneer.” —Paste Magazine

Courtney Sieh graduated from the Cleveland Institute of Art in 2016 with a BFA in illustration and an emphasis in interior architecture. Currently she is freelancing out of a swamp near Minneapolis, kept company at her drafting table by her two cats.

Nellie Bly (1864–1922), born Elizabeth Cochran Seaman, was an American journalist, industrialist, inventor, and charity worker who was widely known for her record-breaking trip around the world in seventy-two days, in emulation of Jules Verne’s fictional character Phileas Fogg, and an exposé in which she worked undercover to report on a mental institution from within. She was a pioneer in her field and launched a new kind of investigative journalism.
Loading...
or support indie stores by buying on