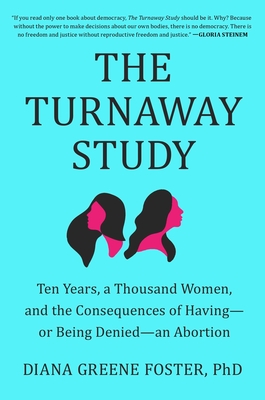 Ten Years, a Thousand Women, and the Consequences of Having—or Being Denied—an Abortion

“If you read only one book about democracy, The Turnaway Study should be it. Why? Because without the power to make decisions about our own bodies, there is no democracy." —Gloria Steinem

“Dr. Diana Greene Foster brings what is too often missing from the public debate around abortion: science, data, and the real-life experiences of people from diverse backgrounds…This should be required reading for every judge, member of Congress, and candidate for office—as well as anyone who hopes to better understand this complex and important issue.” —Cecile Richards, cofounder of Supermajority, former president of Planned Parenthood, and author of Make Trouble

A groundbreaking and illuminating look at the state of abortion access in America and the first long-term study of the consequences—emotional, physical, financial, professional, personal, and psychological—of receiving versus being denied an abortion on women’s lives.

What happens when a woman seeking an abortion is turned away? Diana Greene Foster, PhD, decided to find out. With a team of scientists—psychologists, epidemiologists, demographers, nursing scholars, and public health researchers—she set out to discover the effect of receiving versus being denied an abortion on women’s lives. Over the course of a ten-year investigation that began in 2007, she and her team followed a thousand women from more than twenty states, some of whom received their abortions, some of whom were turned away.

Now, for the first time, the results of this landmark study—the largest of its kind to examine women’s experiences with abortion and unwanted pregnancy in the United States—have been gathered together in one place. Here Foster presents the emotional, physical, and socioeconomic outcomes for women who received their abortion and those who were denied. She analyzes the impact on their mental and physical health, their careers, their romantic lives, their professional aspirations, and even their existing and future children—and finds that women who received an abortion were almost always better off than women who were denied one. Interwoven with these findings are ten riveting first-person narratives by women who share their candid stories.

As the debate about abortion rights intensifies, The Turnaway Study offers an in-depth examination of the real-world consequences for women of being denied abortions and provides evidence to refute the claim that abortion harms women. With brilliant synthesis and startling statistics—that thousands of American women are unable to access abortions; that 99% of women who receive an abortion do not regret it five years later—The Turnaway Study is a necessary and revelatory look at the impact of abortion access on people’s lives.

Praise For The Turnaway Study: Ten Years, a Thousand Women, and the Consequences of Having—or Being Denied—an Abortion…

"A remarkable piece of research.... The Turnaway Study will be understood, criticized, and used politically, however carefully conceived and painstakingly executed the research was. Given that inevitability, it’s worth underlining the most helpful political work that the study does. In light of its findings, the rationale for so many recent abortion restrictions—namely, that abortion is uniquely harmful to the people who choose it—simply topples."
—The New Yorker

"Foster’s findings are particularly relevant now, as the coronavirus pandemic, the economic downturn and ongoing efforts to restrict abortion access have made the procedure even more difficult for many to obtain."
—The Huffington Post

“The Turnaway Study provides definitive evidence that abortion access strongly enhances women’s health and well-being, whereas denying abortion results in physical and economic harm. Based on a ten-year investigation, the book combines engaging, in-depth stories of women who received and were denied abortion care along with study data from 50 peer-reviewed papers published in top medical and social science journals.”
—Ms. magazine

“Required reading for anyone concerned with reproductive justice."
—Kirkus, starred

"Foster listens to the 'turnaway women,' and lets their stories, even more than her own scholarship, disrupt the accepted moral and political narratives that regulate access to abortion."
—Library Journal

“Dr. Foster brings what is too often missing from the public debate around abortion: science, data, and the real-life experiences of people from diverse backgrounds. Dr. Foster’s book offers the first in-depth look at the impact of being denied abortion on mental and physical health, economic wellbeing, relationships, and families. This should be required reading for every judge, member of Congress, and candidate for office — as well as anyone who hopes to better understand this complex and important issue.”
—Cecile Richards, co-founder of Supermajority, former president of Planned Parenthood, and author of Make Trouble

"The Turnaway Study demonstrates the power of narrative in illuminating why women seek abortions. I have always been a feminist, and I believe we have a responsibility to safeguard reproductive rights for women everywhere--and for future generations. In this book, statistics and stories meet to reveal the consequences of denying women this service, as well as what happens when they receive it. The Turnaway Study is an essential read."
—Isabel Allende, author of A Long Petal of the Sea and The House of the Spirits

“Dispelling so many of the prevailing myths about why women seek abortion, this compelling, carefully researched, and unique study makes clear how public policies can so powerfully harm women as they make this deeply personal decision. The moving stories of real women will help illuminate for all of us – both pro-choice and anti-abortion advocates – how restrictive policies can damage the lives of women and their families and why no woman should be turned away when she seeks an abortion.”
—Judy Norsigian and Jane Pincus, authors of Our Bodies, Ourselves

"Discourse and dialogue about abortion are far too often a fact free zone, filled with emotion and ideology and bereft of the wisdom of social science. Foster has been at the forefront of changing this destructive dynamic. She has spent years studying the impact on real people and real lives of being able to access abortion services. Her work challenges how we evaluate morality in public policy--it's a must read."
—Ilyse Hogue, President, NARAL Pro-Choice America

“Our reproductive realities were the victims of fake news before the term existed, which is why Dr. Foster and her team’s work is ever more essential. With rigor and honesty, this book is an important and clarifying contribution to a reality-based conversation about abortion.”
—Irin Carmon, co-author of Notorious RBG: The Life and Times of Ruth Bader Ginsburg

“The stories and findings in The Turnaway Study are captivating and confirm what abortion funds have witnessed from their helplines for decades.  Hundreds of thousands of people calling for help across the country are navigating too many barriers to the care they need. This book illustrates that the process of obtaining an abortion is entirely too complicated and the outcomes of being denied an abortion are unjust.”
—Yamani Hernandez, Executive Director of the National Network of Abortion Funds

“The loud discourse around abortion, framed in the language of politics, religious beliefs, and women’s changing social roles, is so intense that sometimes people don’t take the time to discover the who, what, when and why of actual people making decisions and having real health and social outcomes. Dr. Foster has created an indispensable resource for scientists, policy makers, doctors, and legislators who are seeking facts to inform their opinions.”
—Dr. Stephanie Teal, Professor of Obstetrics and Gynecology, Pediatrics, and Clinical Science at the University of Colorado School of Medicine and past President of the Society of Family Planning

“The Turnaway Study reflects the ultimate in scientific methodology on this contentious subject. The rich, accurate information resonates with the poignant personal accounts. Here is the complete abortion book, both informative for health professionals and accessible to lay readers.”
—Dr. Nada L. Stotland, Professor of Psychiatry at Rush University and past President of the American Psychiatric Association

“Dr. Foster has contextualized the ground-breaking Turnaway Study using the stories of the people who are the most central to the abortion debate but whose experiences are generally overlooked: people who have abortions."
—Monica R. McLemore PhD, MPH, RN, FAAN, Associate Professor of Nursing, UCSF and Chair, Sexual and Reproductive Health at the American Public Health Association

Diana Greene Foster is a professor at the University of California, San Francisco (UCSF) in the Department of Obstetrics, Gynecology, and Reproductive Sciences and director of research at Advancing New Standards in Reproductive Health (ANSIRH). An internationally recognized expert on women’s experiences with contraception and abortion, she is the principal investigator of the Turnaway Study. She has a bachelor’s of science from the University of California, Berkeley, and a doctorate from Princeton University. She lives with her husband and two children in the San Francisco Bay Area.
Loading...
or support indie stores by buying on