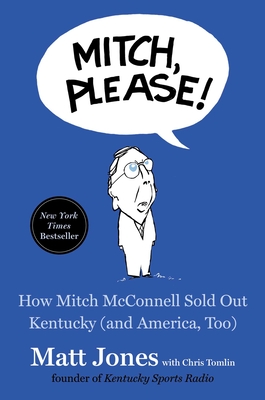 How Mitch McConnell Sold Out Kentucky (and America, Too)

From the founder of Kentucky Sports Radio and attorney Matt Jones, a withering, humorous look at how Mitch McConnell has been bad for Kentucky—and why he needs to be voted out in 2020.

They say all politics is local. In 2020, Mitch McConnell will have served five full terms as a US Senator. Thirty years. The Senate Majority leader’s power is as undeniable as it is infuriating, and the people of Kentucky have had enough. Led by Matt Jones, they (and they alone) have the power to oust him from office.

How did Jones, a local boy turned attorney turned sports radio host come to shine the brightest light on McConnell’s ineptitude? Simple—he knows Kentucky inside and out, and has used the state’s love of sports as an entry point for showcasing how McConnell has failed his fellow citizens both economically and socially for three decades.

Entertaining, maddening, yet ultimately inspiring, these stories from Kentuckians in each of its 120 counties illustrate the Senate Majority leader’s stunning shortcomings. Jones infuses his trademark wit and wisdom throughout, while also offering a beautiful portrait of a state with arguably the most untapped potential in our country.

Ultimately, the white-hot hatred for McConnell on the coasts is just white noise. Only the people of Kentucky can remove him from office. Here, Matt Jones demonstrates he has the influence, charisma, and institutional knowledge to lead the charge. He and his fellow Kentuckians have had enough—and they’re ready for a fight.

Praise For Mitch, Please!: How Mitch McConnell Sold Out Kentucky (and America, Too)…

“Reading Jones and his co-writer, Chris Tomlin, on Kentucky can be like reading Larry McMurty on Texas.”—The New York Times

How do the people of Kentucky feel about Mitch McConnell?

“If Mitch McConnell were a hound dog, even the fleas would stay away from him.”—Powell County

“Truthfully, Mitch McConnell doesn’t have a record with African Americans. To him, we never existed.”—Jefferson County

“He helped bankrupt coal. He’s a yes man. Mitch’s stance is whatever makes him look good, whatever pays the most.”—Lee County

“Mitch will say that he supports troops in front of the cameras, but actions speak louder than words. And his actions are screaming.”—Anderson County

“He IS the problem. Donald Trump is a symptom but McConnell and people like him are the problem.”—Lincoln County

“The expectations for Mitch McConnell are so low that help is not only not expected, it’s assumed it won’t occur at all.”—Martin County

“I don’t know that Mitch McConnell would be in touch at all with a place like this…there’s no one here who can give him money.”—Owen County

He comes across as a Grinch at the highest level…I’ve heard people say ‘I don’t like Mitch, but he brings home the bacon.’ I just don’t know what that bacon has been for us.”—Washington County

“and one more thing I forgot to tell you; Mitch McConnell looks like a turtle!”—Marion County
or support indie stores by buying on
Copyright © 2020 American Booksellers Association