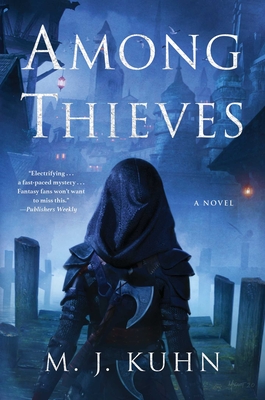 A thrilling fantasy debut—a high-stakes heist novel set in a gritty world of magic and malice, and perfect for fans of Six of Crows!

In just over a year’s time, Ryia Cautella has already earned herself a reputation as the quickest, deadliest blade in the dockside city of Carrowwick—not to mention the sharpest tongue. But Ryia Cautella is not her real name.

For the past six years, a deadly secret has kept her in hiding, running from town to town, doing whatever it takes to stay one step ahead of the formidable Guildmaster—the sovereign ruler of the five kingdoms of Thamorr. No matter how far or fast she travels, his servants never fail to track her down...but even the most powerful men can be defeated.

Ryia’s path now leads directly into the heart of the Guildmaster’s stronghold, and against every instinct she has, it’s not a path she can walk alone. Forced to team up with a crew of assorted miscreants, smugglers, and thieves, Ryia must plan her next moves very carefully. If she succeeds, her freedom is won once and for all…but unfortunately for Ryia, her new allies are nearly as selfish as she is, and they all have plans of their own.

Praise For Among Thieves…

“Gritty, fun and effortlessly immersive…hits the ground running and doesn’t stop. Kuhn serves up a delightful cocktail of rapid-fire action, wit and original world-building, with all the squad goals and banter your heart desires. Fans of Six of Crows, Lies of Locke Lamora, and compulsively reading until 3:00 AM will adore Among Thieves!” —H. M. Long, acclaimed author of Hall of Smoke

“Among Thieves is such a ride, from beginning to end. Morally grey thieves with hearts of gold (sort of) in a fantasy heist? Count me in. I didn't know who I wanted to win, and I love it when that happens. I can't wait to see what Kuhn does next." —Genevieve Gornichec, author of The Witch’s Heart

“A riveting, high-stakes adventure filled with magic, axes, and betrayal—Among Thieves is the fantasy heist book of my dreams. Fans of Mistborn and Dragon Age will love this clever, sarcastic, gritty fantasy tale!” —J.S. Dewes, acclaimed author of The Last Watch

"M. J. Kuhn handles her characters with a surety rarely seen in a debut. Lightning-paced, this novel tosses you onto the dockside with its loveable crew of rogues and misfits. Every one of them's a liar, and it's as much a joy to unravel their own secrets as it is to unpick the bigger secret that beats within the heart of this boldly imagined world. Where there's grit, there's banter. Where there is grim, there is beauty too. You won't want to miss Among Thieves!" —Lucy Holland, acclaimed author of Sistersong

M.J. Kuhn is a fantasy writer by night and a mild-mannered university employee by day. She lives in the metro Detroit area with her husband Ryan, a dog named Wrex, and the very spoiled cat Thorin Oakenshield. You can find more information about M.J. online at MJKuhn.com.
Loading...
or support indie stores by buying on