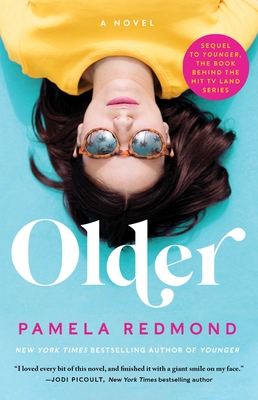 In the hotly anticipated sequel to the beloved Younger—now a hit TV series from the creator of Sex and the City starring Sutton Foster and Hilary Duff—Liza Miller is torn between two cities and two hearts when her bestselling novel is picked up by a major television network.

Liza Miller never dreamed that anyone would be interested in her life, let alone buy a book about it. But everything changes when, on the eve of her fiftieth birthday, she publishes a thinly veiled novel about a woman posing as a millennial called Younger—which her old friend Kelsey wants to turn into a TV show.

Liza is off to Los Angeles to help Kelsey write the pilot. But that means leaving behind her on-again off-again boyfriend Josh, her pregnant daughter, and her best friend Maggie. Can Liza find happiness in her new adventure if it means leaving everyone she loves?

Yet as Liza is swept up in the heady world of Hollywood, she finds herself thinking less and less of her life back home in New York. And when she meets Hugo Fielding—the devastatingly handsome and incredibly flirtatious Brit playing her boss on the show—she toes the line between having a crush and falling in love.

Torn between New York and Los Angeles, a familiar love and a risky one, an established career and a shot at stardom, Liza must decide if it’s too late to go to the ball...and if she even wants to. From the author of the beloved Younger, this is an endearing, hilarious, and relatable tale of second chances and new beginnings that proves: the best thing about getting Older is that you finally get to be yourself.

Praise For Older (A Younger Novel)…

"The best part of a sequel is revisiting characters whose fictional lives you were once invested in—and Older is the best kind of sequel—one that reminds us of why we loved the first book, whisks us into that world again, and satisfies us in its new conclusion. Funny, painfully relevant, and very meta (thanks to the success of Younger on TV), I loved every bit of this novel, and finished it with a giant smile on my face."—Jodi Picoult, New York Times bestselling author of A Spark of Light and Small Great Things

“If Pamela Redmond’s bestseller Younger was a heady cocktail of a novel, Older is a luscious dessert. Tender, wise, and achingly funny, this is the book you want on the beach, in the hammock, and in bed on a rainy day. Try not to devour it in one sitting.”—Christina Baker Kline, New York Times bestselling author of Orphan Train

“Older is a delicious read. It made me smile and laugh out loud and turn pages with sheer delight. Pamela Redmond even made me happy to be older!”—Ann Hood, bestselling author of The Knitting Circle and The Book That Matters Most

“The Younger sequel, Older, has a lot of wisdom between its one-liners…Older explores what happens when a woman rejects societal expectations, embraces her experiences and trusts her gut. If, while doing so, she happens to have a happily-ever-after moment? Why not? At the end of this tumultuous year, perhaps we can all use a little magic in our reading lives.”—The Washington Post

Pamela Redmond is the New York Times bestselling author of more than twenty works of fiction and nonfiction, including Younger, How Not to Act Old, and 30 Things Every Woman Should Have & Should Know. She started publishing novels, cofounded the world’s largest baby name website Nameberry, got divorced, moved from New Jersey to Los Angeles, and changed her name, all after the age of fifty. The mother of three and grandmother of one, Redmond’s website is at PamelaRedmond.com.
Loading...
or support indie stores by buying on
(This book is on backorder)