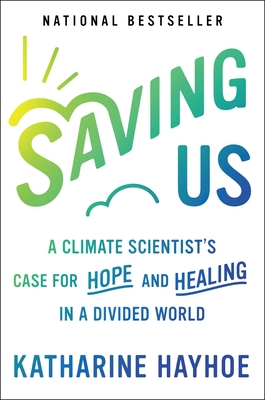 “An optimistic view on why collective action is still possible—and how it can be realized.” —The New York Times

“As far as heroic characters go, I’m not sure you could do better than Katharine Hayhoe.” —Scientific American

“It’s not an exaggeration to say that Saving Us is one of the more important books about climate change to have been written.” —The Guardian

United Nations Champion of the Earth, climate scientist, and evangelical Christian Katharine Hayhoe changes the debate on how we can save our future.

Called “one of the nation's most effective communicators on climate change” by The New York Times, Katharine Hayhoe knows how to navigate all sides of the conversation on our changing planet. A Canadian climate scientist living in Texas, she negotiates distrust of data, indifference to imminent threats, and resistance to proposed solutions with ease. Over the past fifteen years Hayhoe has found that the most important thing we can do to address climate change is talk about it—and she wants to teach you how.

In Saving Us, Hayhoe argues that when it comes to changing hearts and minds, facts are only one part of the equation. We need to find shared values in order to connect our unique identities to collective action. This is not another doomsday narrative about a planet on fire. It is a multilayered look at science, faith, and human psychology, from an icon in her field—recently named chief scientist at The Nature Conservancy.

Drawing on interdisciplinary research and personal stories, Hayhoe shows that small conversations can have astonishing results. Saving Us leaves us with the tools to open a dialogue with your loved ones about how we all can play a role in pushing forward for change.

Praise For Saving Us: A Climate Scientist's Case for Hope and Healing in a Divided World…

“A must-read if we’re serious about enacting positive change from the ground up, in communities, and through human connections and human emotions.”
—Margaret Atwood, Twitter

"Katharine Hayhoe is a connector of dots...an ambassador, if you will, between the science of climate change and the world of evangelical Christian faith and practice...Yet to delve into that with her is to learn a great deal that refreshingly complicates the picture of what is possible and what is already happening, even across what feel like cultural battle lines. If you want to see and walk differently on this frontier, even with humans with whom you disagree, this is for you."
—Krista Tippett, On Being

"A welcome effort to address the politicisation of climate change head-on...Hayhoe is an appealing messenger."
—Financial Times

"Practical advice abounds in this compassionate guide to conducting meaningful discussions about the environment. Those in search of a hope-filled approach will find plenty of encouragement."
—Publishers Weekly

"This heartfelt and empathetic book focuses on shared values ... to build essential bonds and the courage required for the work ahead. Read this vital book and take its exigent message to heart."
—Washington Independent Review of Books

“I’ve seen [Katharine] speak in person and it was electrifying and probably the most powerful moment I’ve ever experienced in the climate movement. This book will be worth every second you spend reading it.”
—Kawai Strong Washburn, author of the PEN/HEMINGWAY award-winning Sharks in the Time of Saviors

“Before you book a flight to Mars, read this book. Conversations fueled by respect and shared values can help save our planet, and Katharine Hayhoe gives us the confidence to do what it takes.”
—Alan Alda, Emmy Award-winning actor and host of "Clear+Vivid with Alan Alda"

“Katharine shares an optimistic outlook on what we all can do to move the needle toward solutions and invite allies under the big tent.”
— Don Cheadle, Academy Award-nominated actor and UN Environmental Program Goodwill Ambassador

"Saving Us contains profound insights on human behavior, and it shows us how our conversations can launch us on the journey away from despair toward awareness and engagement. A real joy to read."
— Christiana Figueres, Executive Secretary of the UN Framework Convention on Climate Change

“Katharine Hayhoe intertwines stories, including her own, with scientific snapshots to provide a powerful blueprint for how we can talk to others about our changing planet. Bold and pragmatic- Saving Us is a vital contribution to the discussion on climate change.”
—Chelsea Clinton, New York Times bestselling author and global health advocate

"There are lots of brilliant climate scientists in America, and some are able to communicate capably to non-scientists. But none of them are quite as clear or as forceful as Dr. Katharine Hayhoe when it comes to telling everyday Americans the truth about climate change. She's one-in-a-million."
—David Gelber, Emmy Award-winning producer, and creator of Years of Living Dangerously

"Saving Us provides the transition from the mind to the heart. And it takes a communicator like Katharine Hayhoe to draw connections between the scientific facts and our hope for healing a fragmented world."
—Patriarch Bartholomew, Ecumenical Patriarch of Constantinople of the Eastern Orthodox Church

"Saving Us offers a roadmap to transform our approach to tackling climate challenges from sprawling global crises to community-driven solutions, recognizing that our diverse and collective voices are key to creating lasting change."
—Abby Maxman, President and CEO, Oxfam America

"Those of us who see climate science clearly can become too despairing and too angry. Saving Us reminds us we need to start from a place of love, open-mindedness and respect. Katharine is the rarest of gifts to our troubled world, equipped with the mind of a scientist and the heart of a saint. This is the book we all need."
— Elizabeth May, Former Leader of the Green Party of Canada

"In Saving Us, climate scientist Katharine Hayhoe teaches all of us how to open hearts and minds to the truths of climate change. Talking about global warming with our own family and friends is one of the most important things we each can do, creating a shared understanding, rooted in empathy, to motivate action."
— Anthony Leiserowitz, Director of the Yale University Project on Climate Change

"Saving Us is a uniquely hopeful approach to the conversation on climate change. Katharine Hayhoe's expertise is on full display both in the way she talks about the science, and in the wealth of ideas she offers for how we can overcome over divisions, but her core argument is simple: we need to talk more with each other."
—Archbishop Thomas Shirrmacher, Secretary General of the World Evangelical Alliance

"Dr. Hayhoe writes personally and persuasively—as a person of faith and a as a scientist—about both the peril of the climate crisis and why we can still have hope. With clear vision, Saving Us gives us the tools to have serious and sustained conversations about the climate."
—Dan Misleh, Executive Director of the Catholic Climate Covenant

"A masterful playbook exploring why past approaches have failed, and how we can all help get it right. In this climate emergency the global fire alarms are still muffled for many; Katharine Hayhoe empowers us to turn up the volume to 11."
—Professor Dave Reay, Chair in Carbon Management and Executive Director of Edinburgh Climate Change Institute, University of Edinburgh

Katharine Hayhoe is a climate scientist and chief scientist for The Nature Conservancy. She is also the Endowed Professor in Public Policy and Public Law and Paul W. Horn Distinguished Professor at Texas Tech University. She has been named a United Nations Champion of the Earth and one of Time’s 100 Most Influential People, and serves as the climate ambassador for the World Evangelical Alliance. Katharine was a lead author for the US Second, Third, and Fourth National Climate Assessments, hosts the PBS digital series Global Weirding, and has written for The New York Times. Her TED Talk “The Most Important Thing You Can Do to Fight Climate Change: Talk About It” has been viewed over 5 million times. She has a BSc in physics and astronomy from the University of Toronto and an MS and a PhD in atmospheric science from the University of Illinois at Urbana-Champaign.
Loading...
or support indie stores by buying on