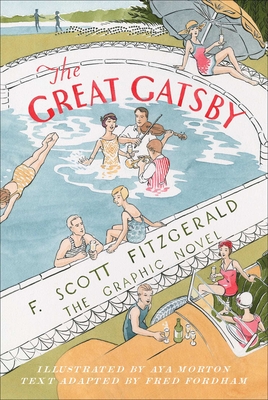 Praise For The Great Gatsby: The Graphic Novel…

"Brings the entire story to life in such vivid, quick-turning pages. The parties, the dresses, the mansions, the green light—all illustrated here beautifully. And it still packs the wallop that the original does!" —Taylor Jenkins Reid, author of Daisy Jones & The Six

"Morton's eye for fashion and interior decor aids the reader in becoming fully immersed in the era, while Fordham's economical reworking of the original text reflects a deep intimacy with Fitzgerald's work." —Shelf Awareness

"Fordham retains much of Fitzgerald’s singular prose, which Morton illustrates with an eye toward period detail and restraint that blossoms into expressive tableaus of vivid color at key moments. Here, Fitzgerald’s incisive exposé of the shallow excesses of the elite feels startlingly fresh nearly 100 years after its original publication."
—Library Journal

Fred Fordham has written and illustrated for various publications, most recently adapting and illustrating the graphic novel version of Harper Lee’s To Kill a Mockingbird. He also illustrated Philip Pullman’s debut graphic novel The Adventures of John Blake: Mystery of the Ghost Ship. He lives in London.
Loading...
or support indie stores by buying on