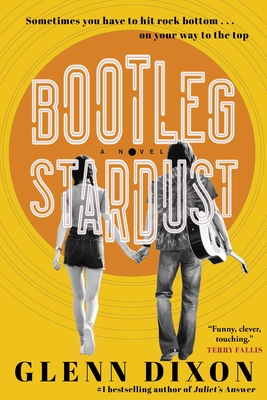 Daisy Jones & the Six meets Nick Hornby in this uplit debut novel about a young musician who auditions for a band and is suddenly catapulted into the wild world of rock and roll stardom, where nothing is quite what it seems.

Sometimes you have to hit rock bottom on your way to the top.

It’s 1974. The music world is rocking with bellbottoms, platform shoes, and lots and lots of drugs. This year’s sensation is an American band called Downtown Exit and their latest album has just gone gold.

For high school dropout Levi Jaxon, things aren’t so great. After bouncing around foster homes for years, he’s living in his best friend’s basement. His dream is to someday be a rock star, but he has a problem—his own band has just broken up.

In an uncanny stroke of luck, Levi lands an audition for Downtown Exit, who are now recording their second album at Abbey Road Studios. He arrives in London and aces his audition, only to learn he’s not really in the band. No, Levi’s job is to sit in the wings and cover for the band’s real guitarist when he inevitably starts tripping on stage.

Levi sticks with it, hoping to step into the role he’s always dreamed of. But he must first navigate egos, jealousies, and deceptions. Frankie, the band’s front man, has it out for him. And Levi has fallen for Ariadne, the band’s photographer. All of them have their secrets, Levi included. And as the band tours through Europe and struggles to finish their new album, Levi comes face to face with unanswered questions from his past and the impossible price that fame demands.

Utterly magical and transporting, Bootleg Stardust is a one-of-a-kind joyride about the power of music to bring people together—and break them apart—and the courage it takes to find your own voice.

Praise For Bootleg Stardust: A Novel…

“[A] story that just never stops. It twists and turns, it’s funny, clever, touching, and could only have been conjured by a very good writer who also plays in a rock band. By the end, the novel’s true spirit made me want to clap and cheer and wave a Bic lighter in the air. Bravo!”
— TERRY FALLIS, two-time winner of the Stephen Leacock Medal for Humour

“I loved this book! A totally wild ride through the opulent and trashy world of 70s rock and roll, when the popularity of bellbottomed bands rose and fell like the tide, and every show teetered between brilliance and disaster. If you can imagine a high-octane cross between Almost Famous, Up and Down with the Rolling Stones, and Wayne’s World (if Wayne and Garth actually joined the band), you’ll land somewhere close to the destructive antics found within the fast-paced, booze-soaked pages of Bootleg Stardust.”
— GRANT LAWRENCE, CBC Music journalist and author of Dirty Windshields

— NANCY PEARL, librarian and author of George and Lizzie

Glenn Dixon is the #1 bestselling author of the memoir Juliet’s Answer. He has played in bands all his life, traveled through more than seventy-five countries, and written for National Geographic, the New York Post, The Globe and Mail, The Walrus, and Psychology Today. Before becoming a full-time writer, he taught high school English for twenty years. He lives in Calgary with his girlfriend. Visit him at GlennDixon.ca or follow him on Twitter @Glenn_Dixon.
Loading...
or support indie stores by buying on