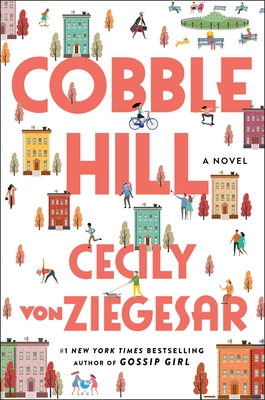 From the #1 New York Times bestselling author of the Gossip Girl series, a deliciously irresistible novel chronicling a year in the life of four families in an upscale Brooklyn neighborhood as they seek purpose, community, and meaningful relationships—until one unforgettable night at a raucous neighborhood party knocks them to their senses.

In this eclectic Brooklyn neighborhood, private storms brew amongst four married couples and their children. There’s ex-groupie Mandy, so underwhelmed by motherhood and her current physical state that she fakes a debilitating disease to get the attention of her skateboarding, ex-boyband member husband Stuart. There’s the unconventional new school nurse, Peaches, on whom Stuart has an unrequited crush, and her disappointing husband Greg, who wears noise-cancelling headphones—everywhere.

A few blocks away, Roy, a well-known, newly transplanted British novelist, has lost the thread of his next novel and his marriage to capable, indefatigable Wendy. Around the corner, Tupper, the nervous, introverted industrial designer with a warehose full of prosthetic limbs struggles to pin down his elusive artist wife Elizabeth. She remains…elusive. Throw in two hormonal teenagers, a ten-year-old pyromaniac, a drug dealer pretending to be a doctor, and a lot of hidden cameras, and you’ve got a combustible mix of egos, desires, and secrets bubbling in brownstone Brooklyn.

Cecily von Ziegesar is the #1 New York Times bestselling author of the Gossip Girl novels, upon which the hit television show is based. She lives in Brooklyn, New York with her family.

Praise For Cobble Hill: A Novel…

"Surprisingly tender...breezy, witty and compulsively fun to read...full of laughable moments...[a] diverting escape that will make readers long for the human connection of a tight-knit neighborhood." —Kirkus Reviews

“Thoughtfully observed and frequently funny...Readers of ensemble fiction by Emma Straub and Amy Poeppel—as well as grown-up fans of Gossip Girl—will enjoy this inside look at the lifestyles of the creative class.” —Booklist

“Von Ziegesar knows her stuff…she channeled her observer’s curiosity into the persona of Gossip Girl.” —Nancy Franklin, The New Yorker

“The [Gossip Girl] series is surprisingly sophisticated. Von Ziegesar takes seriously the inner lives of characters who in any other teen narrative would be stock villains... Most notably, the books have a been-there-done-that honesty about Manhattan social mores, and a (take your pick) refreshing or alarming lack of moralism about teen sex and drugs… [There is also] a tart and distinctive Von Ziegesar–iness, her appealing brand of cynicism—a cynicism that feels authentic, and also, oddly enough, compassionate.”